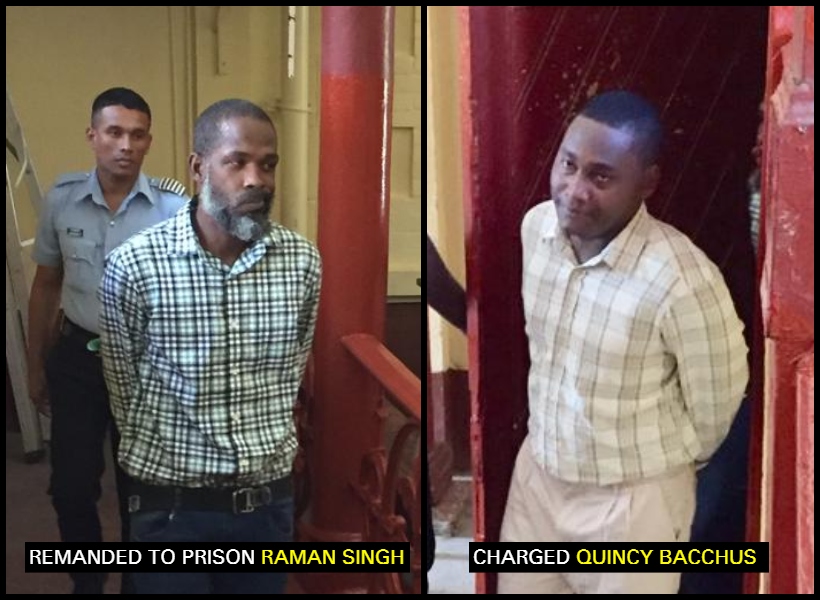 Days after a serving member of the Guyana Police Force (GPF) and a passenger were busted with a quantity of marijuana, they were moments ago charged for the offence.

The men, who are jointly charged, denied the allegation which stated that on October 7, 2019, at Aubrey Barker Road, South Ruimveldt, Georgetown, they had in their possession 24.5 kilograms of marijuana for the purpose of trafficking.

Bacchus was represented by Attorney-at-law George Thomas who asked that his client be released on reasonable bail.

The lawyer told the court that his client, who was the driver of the motor vehicle, met Singh on the roadside with a bag.

Thomas said that his client gave the man a drop to Georgetown.

The lawyer added that at no time did his client check to see what was inside the bag that Singh placed in the trunk of the vehicle.

However, an unrepresented Singh, in addressing the court, stated, “When the police catch us Bacchus turned to me and said let I tell the police is me alone weed but me ain’t know about all that weed.”

Facts presented by Police Police Seon Blackman stated that on the day in question, ranks, acting on information, intercepted the car at Aubrey Barker Street, Georgetown.

The court heard Bacchus, who was dressed in his uniform, was the driver,  while Singh was the lone passenger.

A search was then carried and a quantity of leaves, seeds, and stems suspected to be marijuana were found wrapped in several black bags. Both men were then arrested and taken to the station, hence charged for the offence.

Prosecutor Blackman objected to bail being granted to Singh citing the quantum of drugs and the penalty the charge attracts.

While he made no objections to bail being granted to Bacchus, he asked that it be in a substantial amount.

The Magistrate, after listening to the facts, remanded Singh to prison and granted Bacchus bail in the sum of $300,000. Condition of the bail is that he lodge his passport with the court.
Both men were instructed to make their next court appearance on November 8.