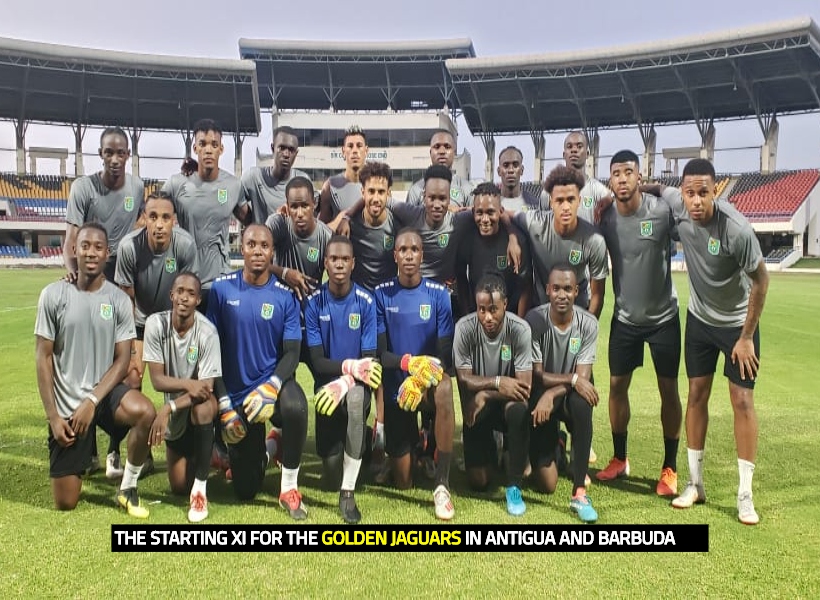 In the first of its doubleheader against Antigua and Barbuda, the ‘Golden Jaguars’ went down 2-1 to the hosts on Friday evening at the Sir Vivian Richards Stadium.

Two quick goals in the space of two minutes within the first 20-minutes of the first half of the game set the tone for victory for Antigua and Barbuda despite a resilient second-half fightback from the Jaguars.

First, Quinton Griffith opened proceedings for the Benna Boys with his strike in the 15th minute before Junior Benjamin doubled the lead just two minutes later with a goal of his own.

With Antigua and Barbuda 2-0 up at the halftime break, the Jaguars came out clawing back early in the second half through the boot of Emery Welshman who rifled home in the 50th minute.

Despite Head Coach, Marcio Maximo’s substitutions which included Clive Nobrega being subbed by Kelsey Benjamin in the 67th minute; Sheldon Holder on for Trayon Bobb (81st) and Daniel Wilson replacing Elliot Bonds in the 88th minute, Guyana could not produce the all-important equalizer and had to settle for defeat when the final whistle was blown.

The Jaguars will now have it all to do on Monday night at home in Guyana when it faces the same opponents at the National Track and Field Centre, Leonora in the return leg. Kickoff time is 20:00hrs.