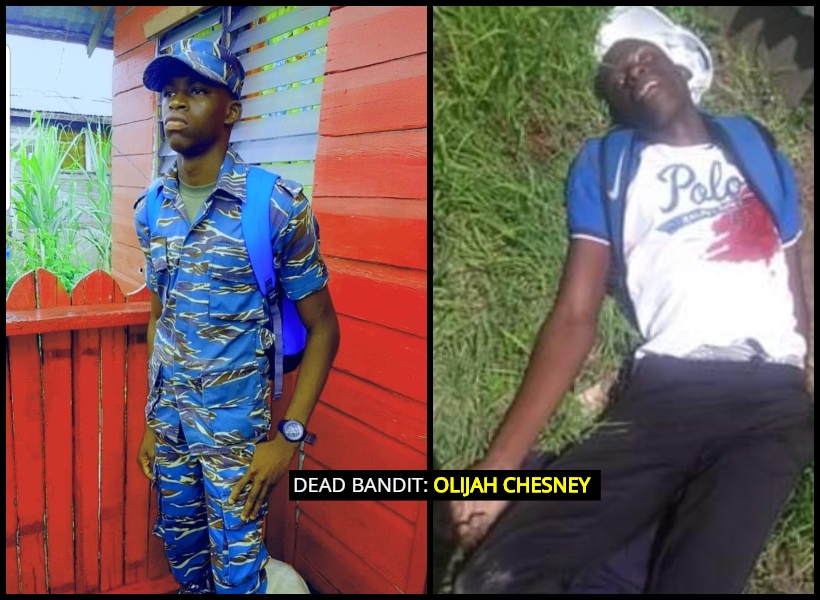 The body of an 18-year-old soldier was found abandoned in Tucville Squatting Area, Georgetown with two gunshot wounds around 11:50 hrs today.

The deceased has been identified as Olijah Chesney of Lot 562 D Field Sophia.

Investigators believe that Chesney’s death may be linked to a shooting that occurred around 10:40 hrs today at Da Silva Street, Newtown, Kitty where a gold dealer, Deon Stoll was killed and his driver injured during an attempted robbery.

Surveillance footage showed the businessman returning fire, injuring one of the bandits. Police sources said that the dead soldier’s appearance is similar to the bandit who was shot.

Investigators are actively making comparisons between the two incidents.

The attempted robbery was captured on surveillance footage.

It shows the businessman’s car being driven along Da Silva Street—heading towards the gold dealership with the gunmen’s car tailing closely behind.

Stoll was seen on surveillance footage returning fire while his driver tried to wrestle one of the men. The bandits did not get a chance to rob the victims.

The victims were immediately rushed to the hospital where Stoll passed away.