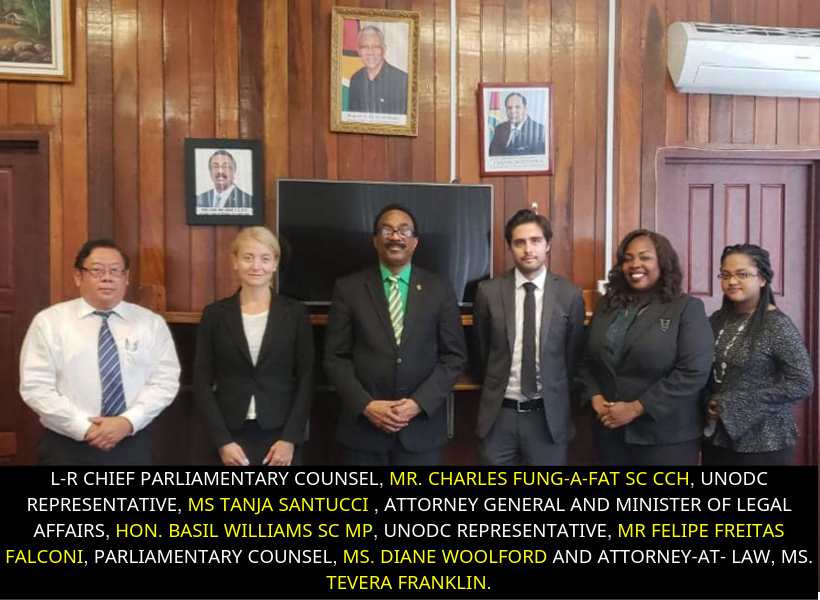 Representatives of the United Nations Office on Drugs and Crime (UNODC) in Vienna, have given kudos to the Attorney General and Minister of Legal Affairs Basil Williams, for the government’s fight against corruption. This was conveyed to the media via a statement from the AG’s Chambers

UNODC’s representatives Tanja Santucci and Felipe Freitas Falconi, who were on a country visit for the review of Guyana’s “United Nations Convention against Corruption Draft Report”, paid a courtesy call to the AG last Thursday.

According to the AG’s Chambers, the representatives praised the efforts taken by the government to stymie the scourge of corruption.

Santucci reportedly noted that she was impressed with the volume of legislation that the Attorney General’s Chambers was able to pass in such a short time and commended the AG.

The UNODC official also noted that she was particularly impressed with the efforts taken by the AG to ensure that Guyana was removed from backlisting by the Financial Action Task Force (FATF).

The AG said that Anti-Corruption and Anti-Money Laundering may often overlap and the fight against both crimes is a priority for the government. He further noted that President Granger had given a high-level commitment to the FATF regarding Guyana’s position on combating money laundering.

Williams said too, that one of the anti-corruption measures taken was to sensitise and train public officials throughout Guyana in anti-corruption measures that must be observed in the performance of their duties within the public service. The Attorney General further noted that another measure taken was the strengthening of the legislative framework.

During the visit, the UN officials, as well as representatives from Cuba and Vanuatu, met with several stakeholders at Bank of Guyana’s boardroom to discuss Guyana’s implementation of articles on “Criminalization and law enforcement” and “International cooperation” of the United Nations Convention against Corruption for the review cycle 2010 – 2015. The team forms part of the United Nations Convention against Corruption secretariat and the implementation review mechanism which covers 186 states.