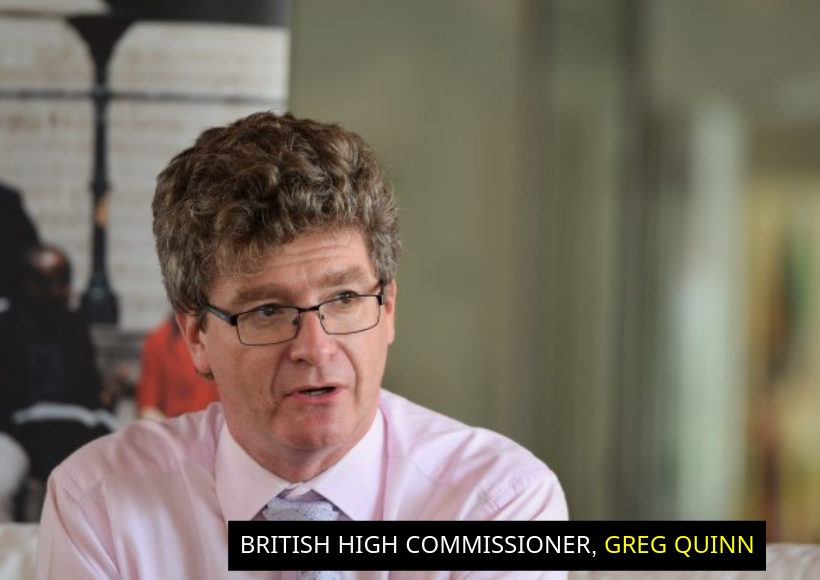 The event was one to commemorate “Spirit Day.”

Quinn noted that Spirit Day began in 2010 as a way to show support for LGBT youth and to take a stand against bullying. He said that the say allows persons to speak out against bullying of LGBT youth and to stand with them. Quinn also noted that this is the largest, and most visible, anti-bullying campaign in the world. Every year millions of people wear purple on Spirit Day as a sign of support.

He said that this is the High Commission’s third year celebrating Spirit Day in collaboration with Society Against Sexual Orientation Discrimination (SASOD).

Quinn quoted Lord Ahmad, the Foreign and Commonwealth Office Minister responsible for the Commonwealth, who said that UK foreign policy without human rights is an unimaginable concept.

The High Commissioner said that the UK is committed to the principle of non-discrimination on any grounds, including on the basis of sexual orientation and gender identity. “We fully support the promotion and protection of the rights of the LGBT community. It is our belief that LGBT people are not asking for special rights, merely to be accorded the same dignity, respect and rights as other citizens. How, as many might argue, can that be wrong?”

Quinn said, “Those facts speak for themselves…The fact of the matter is that human rights are universal and should apply equally to all people. We are implacably opposed to all forms of discrimination and we will continue to work tirelessly to uphold the rights and freedoms of LGBT people in all circumstances.”

He continued, “The UK champions the rights of LGBT people. We urge all our friends and partners to address discrimination, including on the basis of sexual orientation and gender identity. We also call on them to promote diversity and tolerance. My High Commission took part in the June Pride parade with pride and honour and we look forward to doing the same at next year’s parade.”

The envoy said that the strongest, safest and most prosperous societies are those in which all citizens can live freely, without fear of violence or discrimination, and where all citizens, including LGBT people, can play a full and active part in society.”