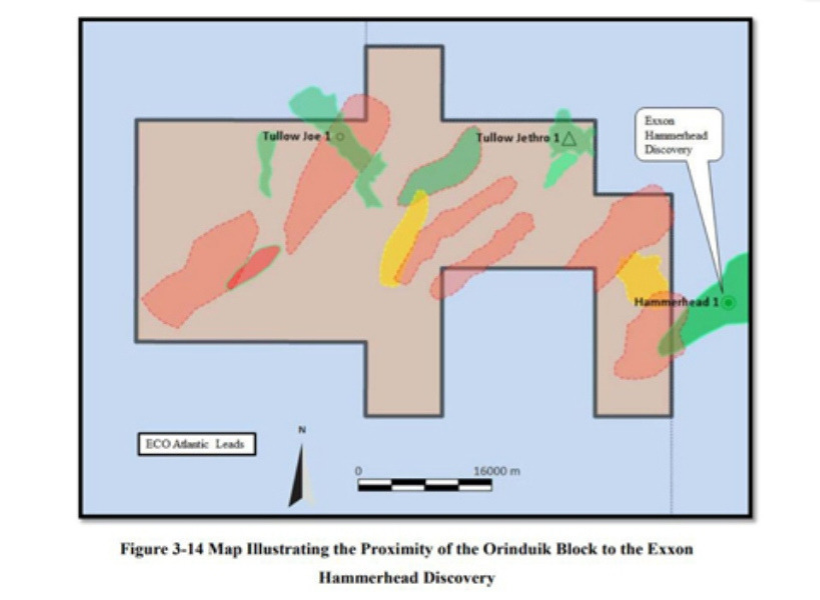 Berenberg Bank, one of the world’s largest multinational investment banks, reported that one of its most attractive merger and acquisition targets, Eco Atlantic, is potentially sitting on net recoverable resources of 600 million barrels of oil, of which over 70 million has now been de-risked through exploration efforts by its partner Tullow Oil on the Orinduik block.

The bank noted that the Jethro prospect on the Orinuik block holds over 250 million barrels of oil, Joe holds approximately 100 million while Exxon’s Hammerhead discovery in the Stabroek Block holds 800m. The Hammerhead find extends into the Orinduik block and is currently being assessed by Eco and its partners Tullow Oil, Total and Qatar Petroleum. In addition to this, the bank revealed that the partners are evaluating additional thinner sands above and below the Jehtro discovery for possible incremental pay.

As it relates to the second discovery on the block called Joe-1, Berenberg said that it is a play opener. It said, “The partners chose to focus on shallower-water prospects in the lower and upper tertiary zones, up-dip from discoveries in the neighbouring Stabroek block, seeking lower-cost development opportunities. The thesis has worked and Joe has a de-risked oil system in the western part of the Orinduik block, where multiple additional leads and prospects exist.”

Berenberg further outlined to potential investors that Eco Atlantic is an explorer and as such, it expects Eco would monetize its 15% stake in Orinduik before development, focusing instead on its exploration assets in Namibia.