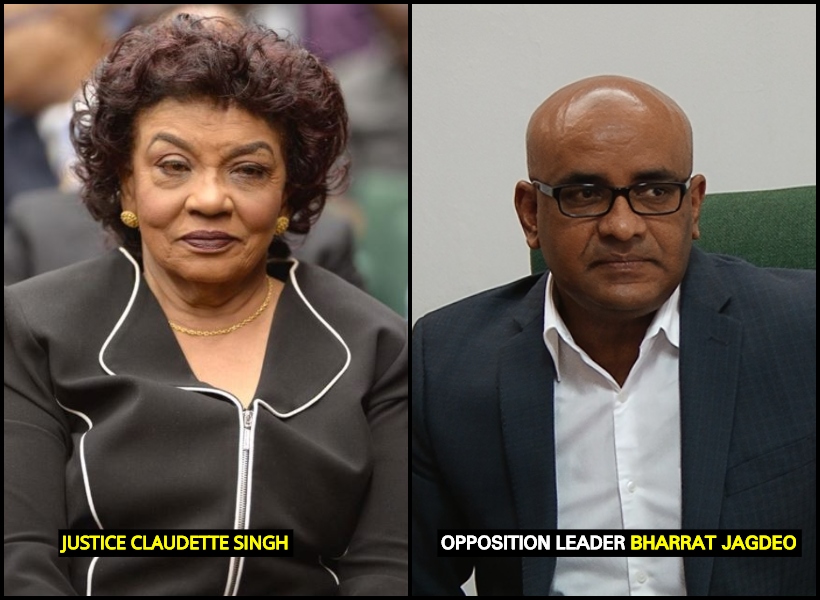 Based on social media comments, a vast majority of his supporters believe otherwise; but, Opposition Leader, Bharrat Jagdeo is adamant that he made the right choice when he supported the appointment of retired Judge, Claudette Singh to sit at the helm of the Guyana Elections Commission (GECOM).

At a press conference he hosted earlier today, Jagdeo said that he has not once questioned the “integrity” of Justice Singh. However, he said that she has to realize that she is no longer operating in a court setting and cannot take for granted that her instructions will be followed in a precise manner. He said that Singh has to be more assertive.

According to the politician, it is clear that Singh is being undermined. He said that it is evident in the fiasco about the extension of the claims and objections period.

Jagdeo also said that there are many things that Singh should have addressed by now, but she is allowing it to take on life in the media and at the Commission despite the fact that she knows the law.

For example, Jagdeo pointed out that Justice Singh, while she was still on the bench, had made a ruling that citizens do not need identification cards to exercise their legal right to vote. He said however, Singh is now allowing conversations at GECOM on similar matters. “This is why I say she needs to be more assertive.”

Jagdeo said, “I would have thought that by now she would have ensured that decisions would have been made for quality control.”

The former President added that while Singh holds back on her role, many are left to wonder, “Will elections be free and fair?”

According to Jagdeo, many are noting that some of the persons who engaged in rigging in the past, are still around, “then there are all of these shenanigans.”

The PPP leader said that the “shenanigans” should not cause citizens to act in a manner as if rigged elections are inevitable. He sought to assure, “We are working assiduously with our international partners to ensure that this does not happen.”

But he also said that the Chair, who entered office “with enormous goodwill,” has a special role to play “to ensure that Guyanese are not in this state of disquiet.”

Jagdeo continued, “That assurance has to come from the Chair herself.”

He then suggested that Justice Singh should hold weekly press briefings after the meetings so that the nation is clear on what occurred. Jagdeo contended, “The conduct about elections is not about what takes place behind closed doors.”