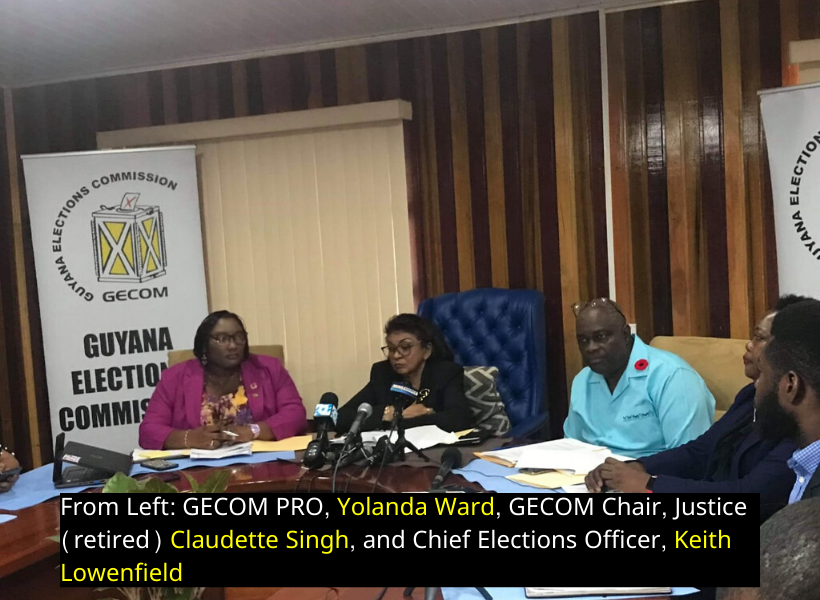 Chair of the Board of the Guyana Elections Commission (GECOM), Justice (retired) Claudette Singh and Chief Elections Officer, Keith Lowenfield were in unison earlier today when they said that there is no disconnect between the functioning of the Board (Commission) and the Secretariat.

Over the past few weeks, politicians and ordinary citizens, who are sympathetic to the People’s Progressive Party (PPP,) have been publicly contending that the secretariat, headed by Lowenfield, is undermining the work of the commission, headed by Singh.

Specifically, Opposition Leader, Bharrat Jagdeo, on several occasions, told the media that he remains confident that Singh’s integrity is untainted. He said however that he believes that the contentions that the PPP is finding with GECOM are a result of the workings of Lowenfield and others within the GECOM secretariat. Jagdeo said that those persons are operating contrary to the will of Singh.

In fact, Jagdeo suggested that, at some point, Singh will have to assert her authority in order to pull the “rogue” persons at the secretariat in line.

This morning, at 11:00, GECOM hosted a press conference that went way beyond the lunch hour. Both Singh and Lowenfield presented opening statements to the media during which they addressed several pressing issues.

At the very beginning of Lowenfield’s address, he was keen to note that the secretariat operates based on the instructions of the Commission. He said, “We primarily operationalize the decisions of the commission.” Lowenfield then went on with his address.

However, when the time for questions, Guyana Standard pointed out what was being touted by the Opposition and asked for this to be addressed.

First responding to this was Singh. She said that the March 2, election is being touted as the “mother of all elections” and therefore, many will have concerns. She said, however, “I can assure you that we at GECOM would do our utmost to see that everything runs smoothly.”

Asked again, “but is there a disconnect?”

Singh responded, “Not that I am aware.”

Lowenfield then told the media, “I do not know of any disconnect or any cause for concern. I have been here for at least two decades and I have always had, and continues to have a very easy rapport and relationship with all the commissioners.”

He continued, “I do not know about the disconnect. I give my views every time and all the times they may not tie into the view of the commissioners.