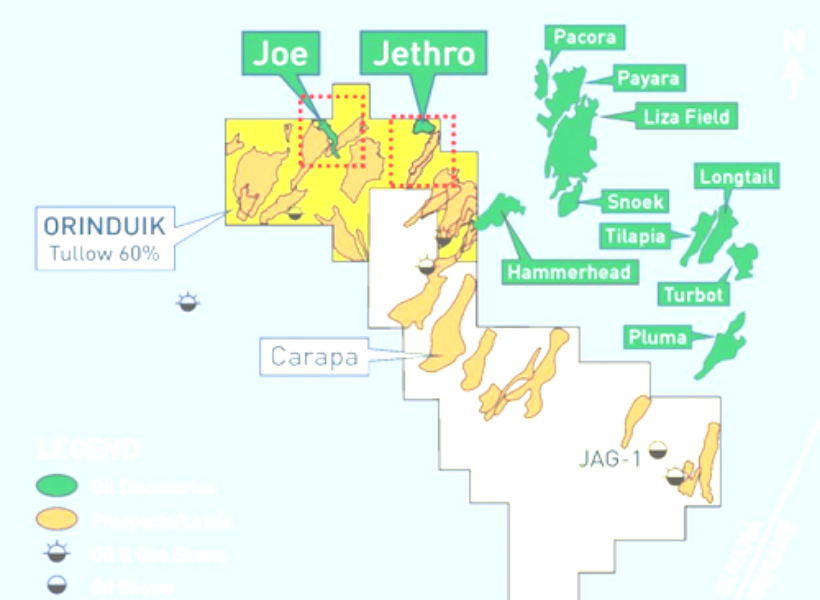 UK multinational Tullow Oil recently disclosed some disappointing news about the quality of oil discovered at its Jethro and Joe wells on the Orinduik Block.

The company said that a preliminary analysis shows that the oil is heavy; meaning, it carries a lot of impurities, particularly sulfur.

Much has already been said in the media about what this meant for the company’s share prices. As reported already, Tullow Oil and its partner Eco Atlantic suffered blows to their share prices, which dropped by approximately 50 percent. But what has not been discussed is the impact of this quality of oil on production costs.

To examine the economics, Guyana Standard interviewed Director of New Ventures at Ramps Logistics, Javed Razack. The official said that heavy oil, which is commonly referred to in the industry as sour crude oil, unequivocally changes the economic burden of oil production from the Orinduik block. “The less sulfur in the oil the more valuable it is per barrel. So Exxon’s oil (from the Stabroek Block) is worth more per barrel because it is light, it has less sulfur and it is therefore called sweet. Sour crude oil is more expensive to extract because it does not flow easily in the reservoir and you, therefore, have to use special technology to extract it. You also have to remember that sulfur is corrosive, so you need technology that would be able to process it too,” Razak stated.

Further, Razak said that the quality of the Orinduik oil reveals that much is still to be understood about the Guyana basin.

In this regard, the Ramps Logistics Director said, “We all thought that given the discoveries in the Stabroek Block, which has been sweet oil so far, the same would have been found in the Orinduik given its proximity to Stabroek. But the Orinduik is producing oil from much younger rocks and so it is possible that it met with different conditions…”

Razak said that a better understanding would be had when Repsol completes spudding its wild cat for the Kauku Block which, like Orinduik, is in shallow waters. At the end of the day, he said, the picture facing Tullow and its operators is that they will have to pay more to bring up oil that is less valuable.

Managing Consultant at Global Energy Advisory Services, Randall Mohammed is of the view, however, that the operators and other industry stakeholders should not be surprised that the Orinduik Block encountered sour oil.

He noted recently in a brief analysis shared with Guyana Standard that neighboring fields in Venezuela and Trinidad produce such oil. Mohammed said that generally, these fields belong to the same hydrocarbon system.

While there is an understanding that the Orinduik oil at the moment, is less valuable, the Trinidadian Consultant said it could work in Guyana’s favour if there is a shortage of sour oil in the future. In this case, he said that prices may increase thereby positively impacting the profitability of producing the low quality oil.

He noted however that one must bear in mind that as the world moves towards cleaner energy, it is envisioned that the demand for low sulfur crudes would increase.

THERE IS STILL HOPE

Raj Shekhar, the Director of Oil and Gas at Global Data PLC, has expressed sentiments similar to Mohammed, in that, the Orinduik find could work in the favour of the license holders.

According to Shekhar, the knee-jerk reaction from the market following the disclosure of the quality of oil results from ignorance, or probably, oversight. He said that the “Guyana story” might have been sold to the market on wrong expectations since the quality of crude was expected due to its sheer geography. In this regard, Shekhar said that Venezuela, Guyana’s neighbour, has an abundance of heavy oil.

But to great relief, the crude type does have a market. In this regard, he said that there is a good number of buyers for heavy oil (China and Russia for example) as well as a number of complex refineries that exist in the USA and Asia. This news agency understands that the sour crude is bought by several complex refineries since it is cheaper to buy and therefore increases their profit margins.

Be that as it may, the Director said that the news of the oil quality puts the Guyana story on more realistic grounds and therefore tames the overhyped expectations of investors. In this regard, he was alluding to the fact that Qatar Petroleum rushed to buy shares in Total following the news that Orinduik has oil. He said that investors will learn the issue of risk-taking in the oil and gas industry the hard way, and may give more respect to the adage that says, “Don’t count your chickens before they are hatched.”