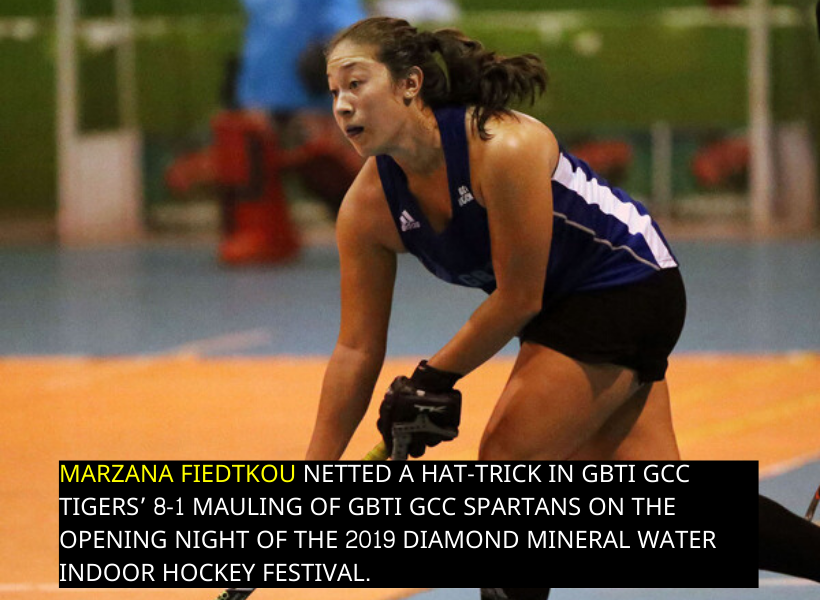 In the opening match of the night which was a ladies affair, Saints got the better of Red Wyne in a six-goal thriller with the former coming out victorious at 4-2. Scoring for the victors was Tekeisha De Leon who grabbed a hat-trick while Clayza Bobb netted a solitary strike. Meanwhile, in a losing cause, Minsodia Culpepper and Tamala Glen had a goal apiece.

Bounty GCC took on YMCA Old Fort in the Men’s Over-35 category and lost 3-5; Jason De Santos was the main antagonist for Old Fort and grabbed two goals. He was supported by Adrian Brandt, Dwight Sullivan and John Abrahams who nicked a goal each.

Scoring for Bounty GCC was Kevin Spencer who had a brace of his own while Dwayne Scott also struck one goal.

The 2018 National Sports Woman of the Year, Marzana Fiedtkou led the line for the Tigers as she netted a hat-trick with goals also coming from Sonia Jardine who netted a brace as Ashley De Groot, Gabriella Xavier and Tiffany Solomon each scored a goal respectively. The Spartans lone goal came via Makeda Harding.

Over in the Men’s Open category, Bounty GCC got off to a winning start in a cagey 2-1 encounter with Saints, Kevin Spencer and Steven Xavier accounted for Bounty’s goals with one each while Seon Sookhai netted Saints’ lone goal.

Arguably the match of the evening, YMCA Old Fort and Pepsi Hikers battled to a 4-4 draw in the curtain closer on day one. It was all end-to-end action but neither side was able to pull ahead. Omar Hopkinson led the attack for Old Fort with a double-strike while Aderemi Simon and Warren Williams contributed a goal each.

National striker Robert France netted a brace for Pepsi Hikers and received valuable support from Aroydy Branford and Jamarj Assanah who had a goal apiece.

The action continues this evening at the same venue with the finals of the respective categories slated for Sunday (December 1) with US$ 3500 up for grabs along with individual accolades.