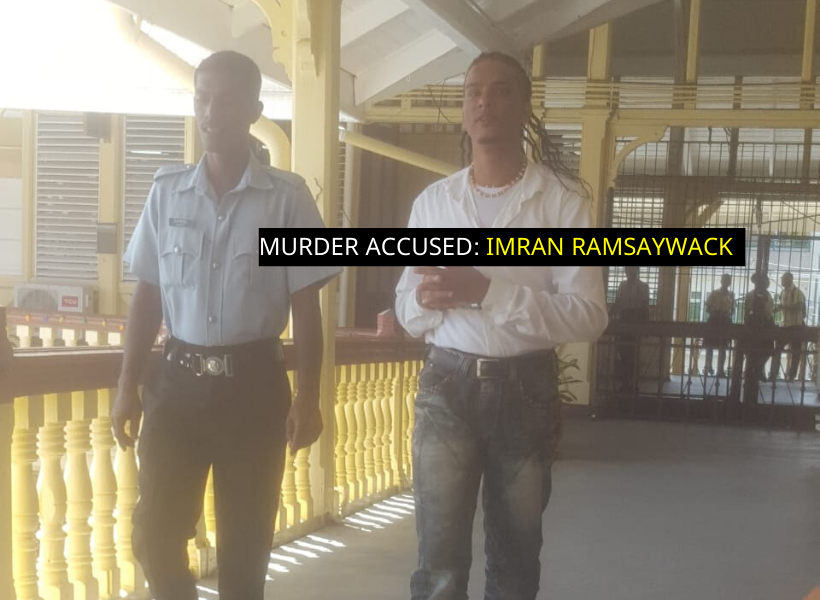 The trial of Imran Ramsaywack who is accused of the March, 2015, murder of US-based Guyanese, Samantha Benjamin, continued this morning before Justice Sandil Kissoon and a jury at the High Court.

Ramsaywack, 29, also known as “Kevin Jones” and “Coolie Boy” pleaded not guilty to a murder indictment presented against him by State Prosecutors Abigail Gibbs and Mandel Moore. The murder accused is being represented by Attorney-at-Law Ravindra Mohabir.

When the trial continued today, police rank Deoraj Ramdeholl, who is currently out of the jurisdiction testified via SKYPE. He told the court that during March 2015, he was stationed at the Vigilance Police Station, East Coast Demerara where he was attached to the Criminal Investigation Department (CID).

He said at around 07:30hrs on March 26, 2015, he visited the Annandale foreshore where he found the body of a woman stuck between two rocks. The body, he said, which was clad in a blue bra and pink skirt had no head, arms and legs. He added that upon examining the body there were chop wounds on the abdomen. He said that he subsequently retrieved a head, two arms and legs from the sea.

Acting on information, Ramdeholl testified that on April 03, 2015, he, along with a party of policemen visited a house located at Lot 103, Middle Walk Buxton, East Coast Demerara, where they contacted Ramsaywack, who at the time, gave his name as “Kevin Jones.” According to the police rank, Ramsaywack told him that he and Benjamin resided at the property and that he last saw her on March 27, 2015, at around 10hrs.

Ramdeholl told the jury that he searched the north-western bedroom of the home and found what appeared to be blood on a mirror and beam. He said Thereafter, he put a murder allegation to Ramsaywack who was arrested. Subsequently, he said he searched a fowl pen and found a cutlass, after which he escorted Ramsaywack to the Vigilance Police Station. There, he added, Ramsaywack was shown the cutlass and admitted that he and two other men used it to chop off Benjamin’s head, arms and legs.

The police witness recounted that the murder accused was taken back to the house where he pointed out a yellow wheel barrow that was used to transport the woman’s body to the foreshore. The police rank also told the court that Ramsaywack took him to an area at the foreshore where they chopped off the woman’s head. He added that the remains were transported to Memorial Gardens.

Ramdeholl said that the other two men who Ramsaywack fingered in the murder were also arrested. However, they were later released.
Ramdeholl further stated that he is unaware if the two men provided police with a statement. Questioned by Ramsaywack’s lawyer as to whether he retrieved fingerprints from the cutlass or wheel barrow, Ramdeholl replied in the negative. The wheel barrow and cutlass were tendered in court for identification purposes.