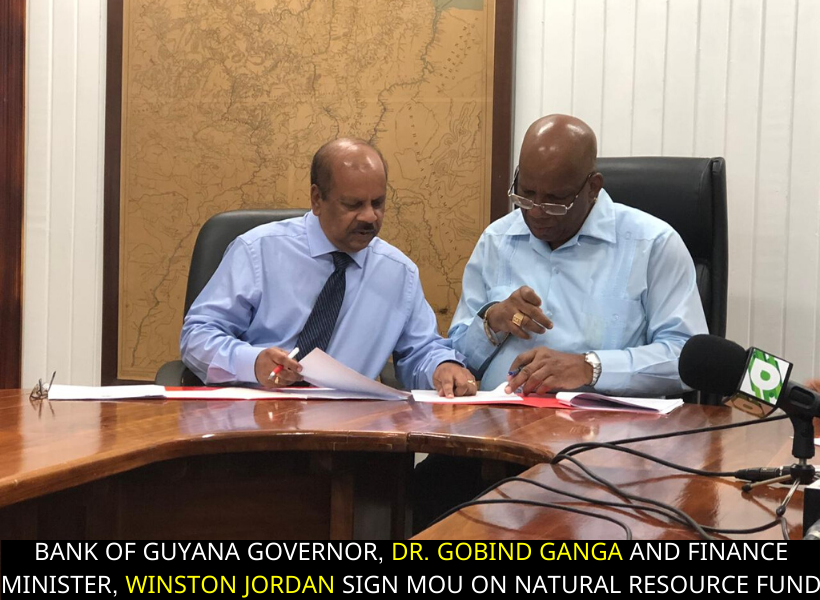 Minister of Finance, Winston Jordan and Central Bank Governor, Dr. Gobind Ganga, signed a Memorandum of Understanding (MoU) today at the Ministry’s Boardroom on Main Street to ensure the prudent day-to-day management of the Natural Resource Fund. That Fund would be held at the Federal Reserve Bank of New York which Guyana has been doing business with for more than 50 years.

At the simple signing ceremony, Minister Jordan indicated that there are two other aspects that will follow the signing of the MoU, both related to due diligence.

The Minister said, “This is to show we have a basis for establishing the find along with where the money would be coming from as well as an estimate…The third aspect has to do with signatures and so forth.”

Minister Jordan also noted that the MoU will be on the websites of the Finance Ministry and Central Bank. The official also noted for those who are not au fait with the operations of such special accounts that they cannot be held at Central Bank as they would not gain any interest. He said, too, that inflows into the Fund will be in US dollars.

In his brief commentary, Dr. Ganga said that the MoU is to ensure effective management of the Fund while noting that Bank of Guyana remains highly committed to transparency.

The Central Bank Head said that the MoU sets forth the obligations of the Bank as the manager which includes receiving and accounting for all deposits into the Fund, investing the Fund in eligible asset classes, appointing private managers and custodians and reporting on the performance of the Fund on a monthly, quarterly and annual basis. “…We will be as transparent as ever,” he added.

In preparation for its role as Operational Manager of the Fund, the Governor said that the Bank has begun building capacity with support from the World Bank’s Reserves Advisory and Management Programme with whom an agreement was signed on October 1, 2019.