Home News We never intercepted truckload of weapons in Corentyne; it is “completely false”... 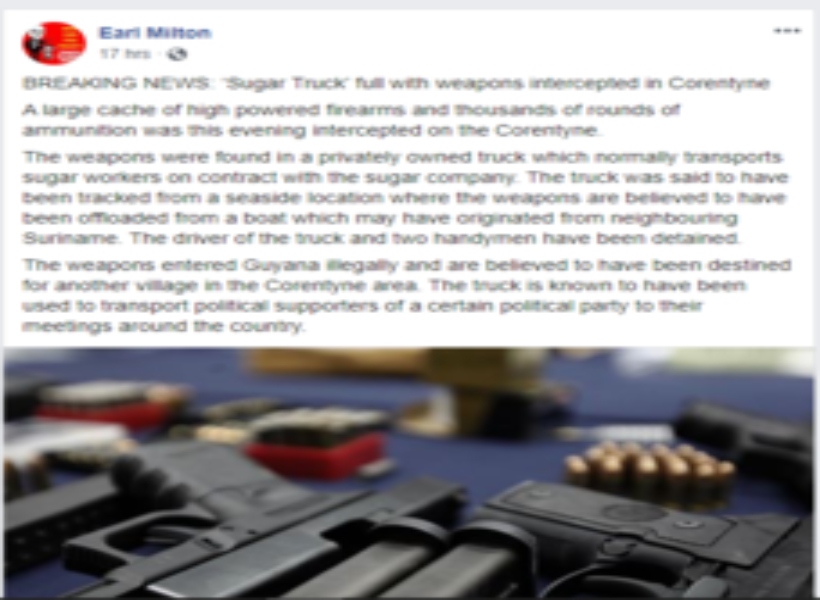 A Facebook user, Earl Milton has alleged that a “sugar truck full of high-powered firearm and thousands of rounds of ammunition” was intercepted in Corentyne, Berbice yesterday. However, the Police Commander of that region, Senior Superintendent Calvin Brutus, has debunked this claim; labelling it as “completely false”.

Milton, in his post, stated that the weapons were found in a privately owned truck which normally transports sugar workers on contract with the sugar company.

The police through its Public Relations and Press Officer, Superintendent of Police, Jairam Ramlakhan, subsequently issued a statement to the media.
It read: “Reference to the above Facebook post by one Earl Milton under the caption: Breaking News-Sugar truck full with weapons intercepted in Corentyne, please be advised that the Regional Commander of Region 6, Senior Superintendent Calvin Brutus has indicated that the information is completely false since he is totally unaware of any such report.”

The post has already generated much speculation among Facebook users, who are now pointing fingers and engaging in flame wars.