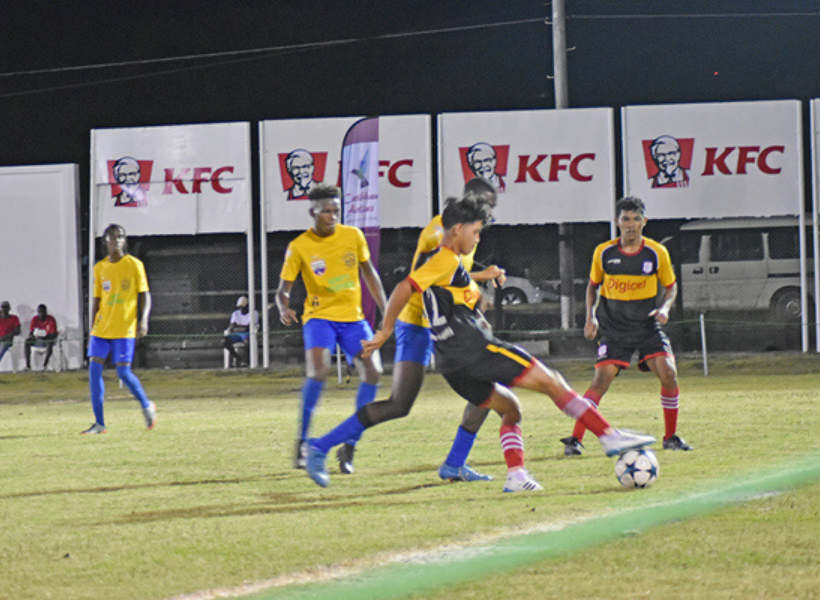 The semi-final matchups of the KFC sponsored Goodwill Football Tournament organised by the Petra Organisation has been set as Trinidad and Tobago side Shiva Boys Hindu College and Waramadong produced sterling performances to book semi-final berths.

With Lodge Secondary and Annai Secondary already through to the semi-finals, Shiva dismantled Annandale 6-2 while Waramadong cruised to a 4-0 win over Marian Academy at the Guyana Football Federation’s (GFF) National Training Centre in Providence.

Annandale looked to take the fight to favourites Shiva in the opening stages and were rewarded when Junior Harrington opened proceedings in the 13th minute with a well taken goal. However, Shiva recovered and settled into their rhythm as they took charge of the game with skipper Adica Ash equalizing in the 24th minute, his teammate Nigel Carraby would hand their side the lead just two minutes later.

The game remained 2-1 heading into the halftime break but upon resumption, Ash struck his second goal of the game in the 49th while Flex Lewis (55th) and Jamal Lewis (60th) struck in quick succession to give Shiva an unassailable 5-1 lead.

Annandale’s Omari Glasgow found the back of the net in the 73rd minute to make it 5-2 but Ash sank Shiva’s sixth in the 83rd to complete his hat-trick and ensure his side ran out 6-2 victors at the full-time whistle.

The semi-finals will be played at the Ministry of Education ground on Friday (December 20) with Shiva Boys facing Lodge Secondary from 17:00hrs and Annai taking on Waramadong in what is expected to be a thriller at 19:00hrs.