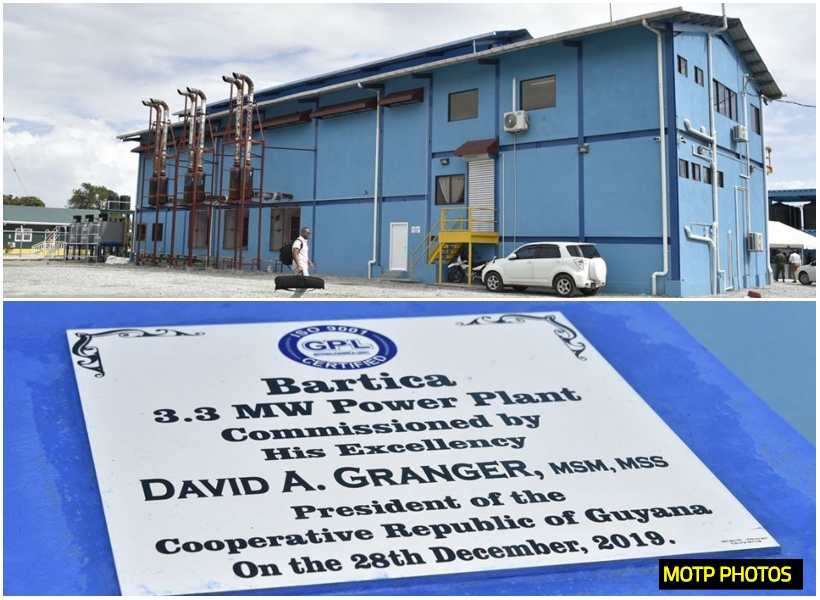 President David Granger, this morning, commissioned a brand new power station at Dogg Point, Agatash, Bartica, Cuyuni-Mazaruni (Region Seven), where he noted that it will bring unprecedented relief to residents, who have experienced severe power outages for the longest while.

The $800M power station is being powered by three 1.1 megawatt high-speed diesel engines, giving a total output of 3.3 megawatts of electricity. The facility was constructed by Gaico Construction.

The power station will replace the current one in central Bartica, which is said to be a noise and water pollutant because of its location.

The decision to construct a new station was made following increased demands due to the expansion of the town. Strain was placed on the old station, which often led to frequent outages.

During the featured address, the president said that Bartica has enjoyed unprecedented development over the last four and a half years. He pointed out that the town has benefitted from increased budgetary allocation moving from $276M in 2015, to $1.9B, this year.

He noted too, that Bartica’s infrastructure is being upgraded with the Bartica/Potaro road, as well as the rehabilitation of roads within the town.
He said that a new modern stelling has since been erected, which is in accordance with the government’s vision to place Bartica on the path of modern development.

“I thought I was coming into Barbados just now, but people said it’s Bar-tica and not Bar-bados. It looks so modern,” the president said.
He added that the Regional hospital has been enhanced, and a new water ambulance provided to transport patients on referral. The waste disposal system and the water distribution system are all being modernized, he told attendees.