Home News Regardless of political affiliation, come together and help transform your towns –... 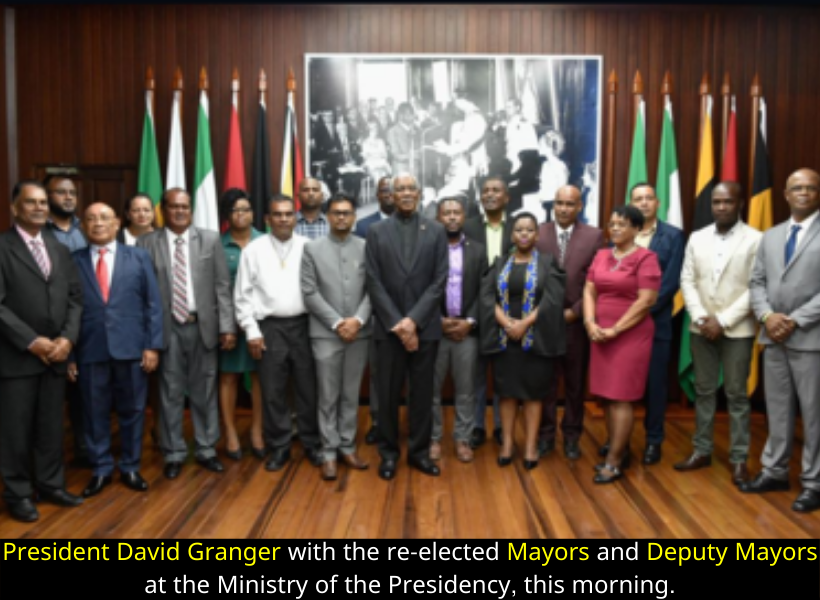 President David Granger, this morning, administered the Oath of Office to the re-elected Mayors and Deputy Mayors for the ten Municipalities, during a simple ceremony, held at the Ministry of the Presidency.

The Head of State in a brief address, called on the Mayors and the Deputies to recognise their responsibility to serve their constituents, regardless of political affiliation and to lead the process of transforming the towns into centres of commerce and industry. He also urged them to ensure public services are provided to the people in collaboration with the other levels of Government.

President Granger said that democratically elected Town Councils, Neighbourhood Democratic Councils and Village Councils are now part of the system of regional administration. Municipalities are essential elements of the Local Government system, he said, adding that their role has been expanded beyond the mere provision of municipal services.

“They are now expected to become agents of change, drivers of development and protectors of the environment in collaboration with Central Government and the Regional Democratic Councils,” he said.

As Guyana aligns itself to become a state of economically-powerful regions characterised by universal access to public services, the President said that Town Councils, therefore, must retool their administrative systems to become the engines of enterprise, employment and economic development. He noted that capital towns are the main centres of commerce and industry, the principal ports or terminals of international trade, the seats of public administration and the main settlements of their population.

He said Town Councils should revamp and retool their admin systems to enable them to become engines of enterprise, agents of employment and engines of economic development. “Regional councillors regardless of their political affiliation must collaborate for the common good of their municipalities and their regions,” he noted.