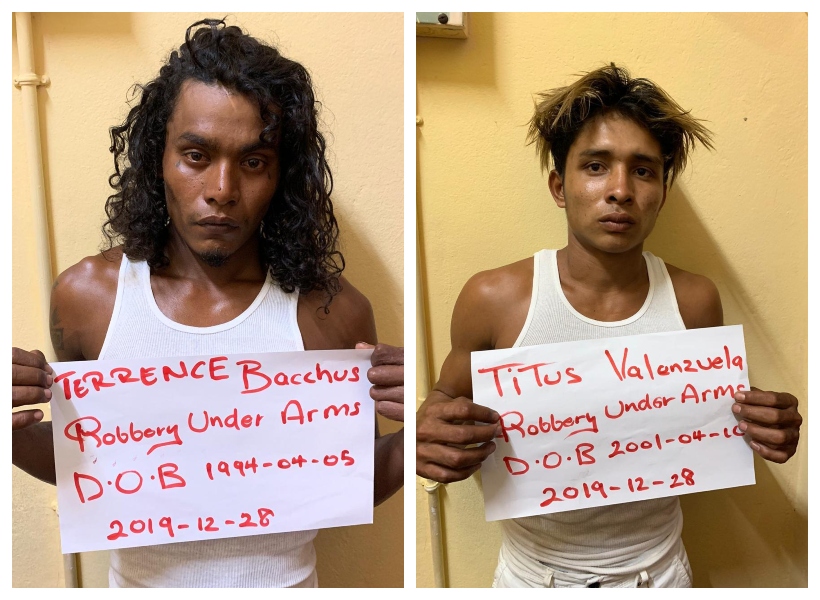 “I robbed him because my family needed the money. My lil brother have to go to school. I took away my boss phone because I didn’t want him contacting anyone,” were the words of man who pleaded guilty to robbing his boss.

Terrence Bacchus, 25, a miner of Linden and Titus Valenzuela, 18, a miner of Kuru Kuru, Linden Soesdyke Highway, were jointly charged for the the offense.

The first charge stated that on December 27, 2019 at Takutu Backdam, Cuyuni River, while being armed with cutlasses, they robbed Candacia Ramroah of a phone valued $58,000.

Bacchus denied both allegations while Valenzuela pleaded guilty to the charges. Both men appeared before Chief Magistrate Ann McLennan in the Georgetown Magistrates’ Courts.

Facts presented by Police Prosecutor Gordon Mansfield stated that both men are employed by Pintoo who is a Brazilian national and the owner of a mining operation at Takutu Backdam, Cuyuni River.

The court heard that a few days prior to the robbery, the defendants “washed down” after which Pintoo closed operation and they were sent home for the Christmas holidays.

However, the defendants went away and later planned to rob their boss. On the night in question, they returned to the victim’s mining camp.

Pintoo and Ramroach were in the company of each other when the defendants went into their camp and tied them up. The men then relieved the victims of the articles and made good their escape.

The matter was reported to the Bartica Police Station and following investigations, the men were arrested and the stolen articles were subsequently recovered.

The defendants then gave caution statements detailing how they planned to commit the robbery. Magistrate McLennan sentenced Valenzuela to 12 months in jail.

The magistrate then remanded Bacchus to prison until January 9, 2020 when he will appear at the Bartica Magistrate’s Court.