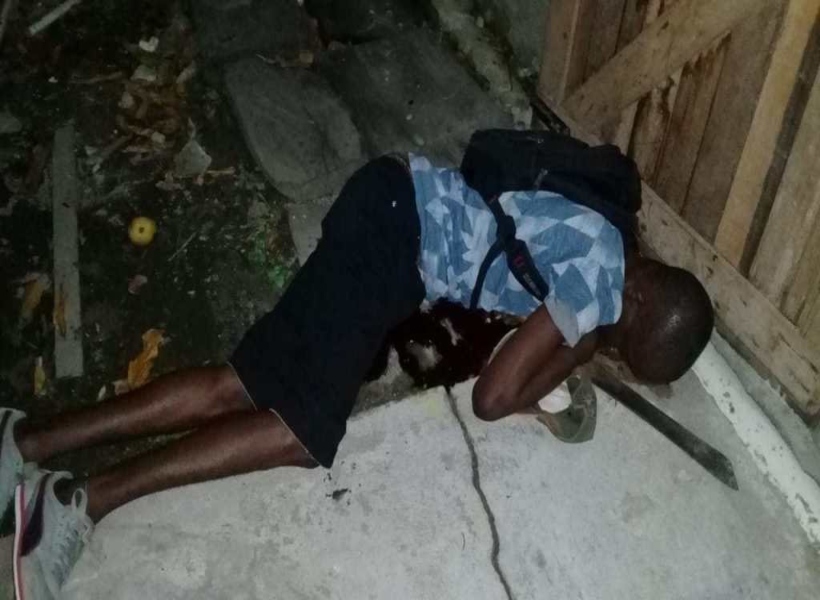 Two of the three bandits who were captured last night following a robbery at a Chinese restaurant at Tuschen Housing Scheme, West Coast Demerara (WCD) have placed the blame on their dead accomplice—alleged serial robber, Mark Prince.

Prince was shot dead when he attempted to attack the owner of the building—which houses the Chinese restaurant—with a cutlass. A second bandit, Shaquille Wilbury of Buxton, East Coast Demerara (ECD) was wounded.

Captured bandits, Jonathan Harry of East Ruimveldt and Akande Ross of Herstelling, East Bank Demerara (EBD) said that it was Prince who called to inform them about a robbery he wanted to carry out on a Chinese business place.

The men told the police that the deceased picked them up in Georgetown and drove them to the crime scene. They alleged that they had no other choice but to play along.

Guyana Standard has been informed that when the men got to the scene, they parked their Nissan Bluebird motorcar in front of the restaurant and all four of them went inside where they proceeded to relieve a customer and the Chinese couple of their belongings. They were armed with a handgun and cutlasses.

A police source said that after robbing the restaurant, two of the bandits proceeded to take the Chinese couple to their living quarters which is in the same building while their accomplices stood guard.

At this point in time, the owner of the building, who lives next door and is a licensed firearm holder, heard the commotion and went to investigate. The deceased and Wilbury, upon seeing the owner, attempted to attack him with cutlasses but both sustained gunshot wounds in the process. Prince died at the scene.

Wilbury was taken to the hospital while the other two were arrested. While victims told the police that a woman was a part of the robbery, the suspects have not provided any information pertaining to her whereabouts.