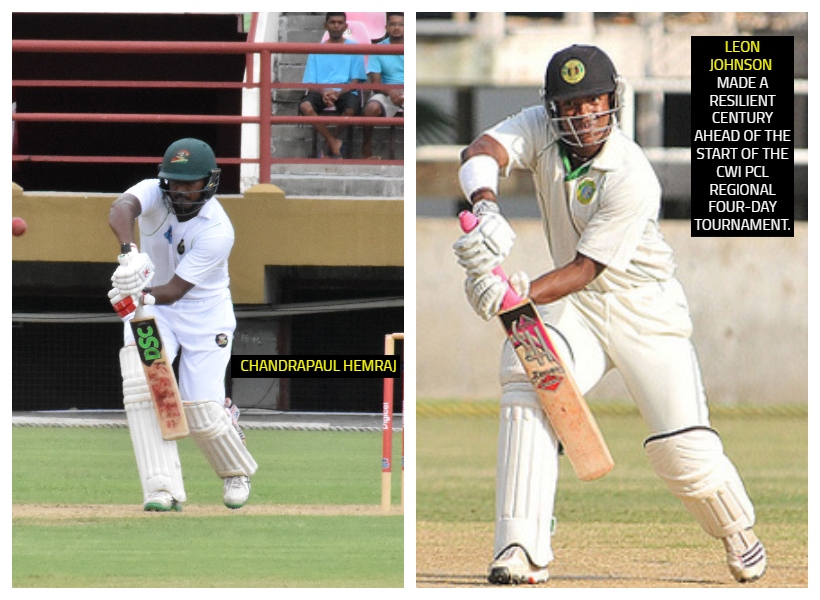 Leon Johnson’s side, resuming on their overnight score of 85 for 1 on Friday at the National Stadium, Providence, saw, opener Chandrapaul Hemraj (46 not out) and skipper Leon Johnson (23 not out), push their second-wicket partnership from 30 runs overnight to 167 before Hemraj was caught behind by Kemol Savory off the bowling of Ronaldo Ali-Mohamed for a commanding knock of 104.

Hemraj’s innings lasted 199 minutes, in which he faced 149 balls and stroked 8 fours and 6 sixes. His innings took Leon Johnson’s team to lunch, comfortably placed on 184 for 2, with Johnson unbeaten on 53 and Tagenarine Chanderpaul 5 not out.

After lunch, Johnson and Chanderpaul took their third-wicket partnership to 89 from 115 minutes, with Johnson registering 104 retired out, in an apparent cause to have a few of his other batsmen take a knock in the middle.

Vishal Singh got off to a decent start but failed to capitalize on the match practice opportunity, being caught by Anthony Adams off the bowling of Trevon Griffith for 18.

Johnson’s team went to tea on 290 for 4 (inclusive of Johnson’s wicket), with Tagenarine Chanderpaul unbeaten on 35 and Christopher Barnwell not out on 5.

After tea, though showing positive signs, Christopher Barnwell was unable to register at least a half-century, due to Ricardo Adams inducing a false stroke to have him caught by Quintin Samson for 27. Barnwell faced 37 balls, batted for 45 minutes and hit 3 fours and 1 six.

Meanwhile, Chanderpaul’s 185 minutes innings, which included 4 fours, earned him 51 before he retired out, giving other batsmen the opportunity to bat.

With the score on 332 for 5, batsmen, Raymond Reifer and Antony Bramble tried to utilize their opportunity to spend some valuable time at the crease. Anthony Bramble got off to a good start, but was adjudged LBW to Antony Adams for 24. Kevin Sinclair was the next batsman set to take to the field to bat, however, with just 20 minutes remaining in the final day’s play, the two captains decided to bring the game to an end.

At the end of the CGI 2 Day Practice Match, Leon Johnson’s side in reply to Anthony Adams team’s first innings of 244 all out, was 388 for 7 (inclusive of Johnson and Chanderpaul who retired out) from 177 overs. Raymon Reifer was unbeaten on 27 from 58 minutes, off 49 balls, inclusive of 1 four and 1 six.

Bowling for Adams’ side, Ronaldo Ali-Mohamed was the pick of the bowlers with 2 for 36 from 12 overs.
The Guyana Jaguars team departs Guyana on Monday (January 6) for Antigua, where they will open their Cricket West Indies (CWI) Professional Cricket League (PCL) Regional Four-day title defense against the Leeward Islands Hurricanes from January 9 at the Sir Vivian Richards Cricket Ground (SVRCG).