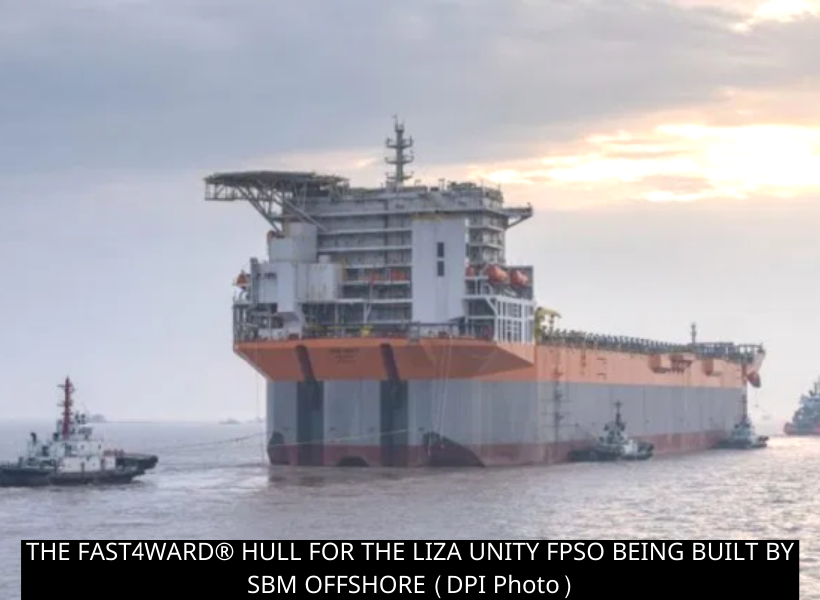 Construction of Guyana’s second floating, production, storage and offloading (FPSO) vessel the Liza Unity has ramped up with the arrival of the hull in Singapore.

SBM Offshore reported on Monday that the Fast4Ward® hull safely arrived at Keppel yard in Singapore from China after travelling 2,300 nautical miles.

The Dutch-based global group of companies is one of the world’s leading oil and gas service providers. It is involved in designing and engineering, construction, installation and operation of FPSOs globally.

Guyana’s first FPSO, the Liza Destiny which began oil production in December, was designed and built by SBM.

The company noted that the lastest hull’s arrival represented a significant milestone on the path to delivering its first standardised FPSO.

“The hull was completed in less than two years from first steel cut in March 2018. The MPF1 hull was allocated to the Liza Unity FPSO for offshore Guyana, following Final Investment Decision (FID) by ExxonMobil, Hess and CNOOC in May 2019. This milestone is in line with our client’s project schedule, which targets Liza Phase 2 start-up in early 2022,” the release stated.

The FPSO is designed to produce 220,000 barrels of oil per day and to have associated gas treatment capacity of 400 million cubic feet per day. It will be able to store around two million barrels of crude oil. (Department of Public Information)