Home Court Nandlall moving to the CCJ in attempt to not lead defense in... 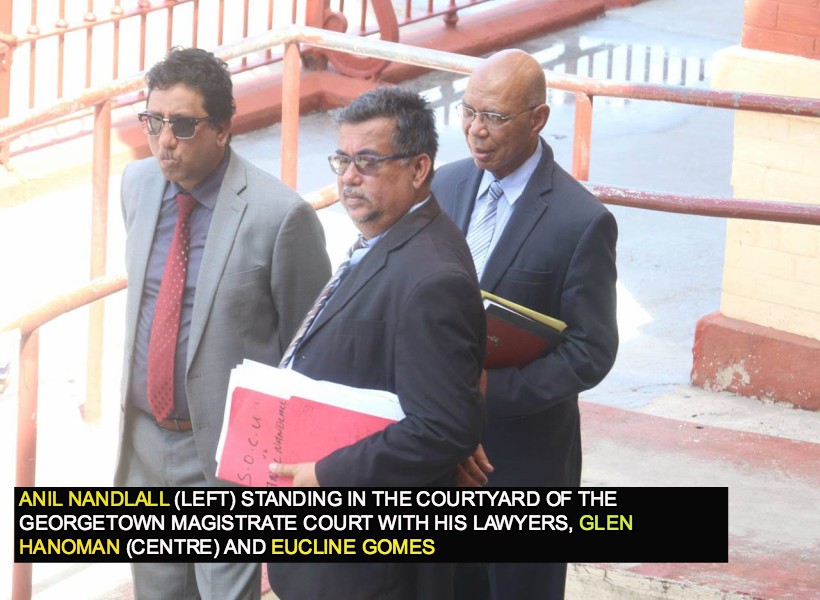 Former Attorney General and PPP-aligned lawyer, Anil Nandlall today informed the court that he is moving to the Caribbean Court of Justice to not lead a defense to the charge.

This is in relation to him being accused of fraudulently converting Commonwealth Law Reports belonging to the State, to his own use and benefit.

This was disclosed by Nandlall this afternoon when his trial continued before Magistrate Fabayo Azore in the Georgetown Magistrates’ Courts.

When the matter was called, Nandlall asked for six weeks since his two leading lawyers, Glen Hanoman and Neil Boston were unable to attend the hearing.

He added that an application for leave has already been made and will be heard on January 28.

Nandlall further went on to tell the court,”They [his lawyers] will challenge whether the court should proceed to hear a defense and whether the Magistrate’s decision to call the defendant [him] to lead a defense is a correct one.”

The Magistrate then adjourned the matter until February 7,2020.

Nandlall has failed in two attempts to have the charge quashed. He had approached the High Court and the Appeal Court seeking judicial review of a decision made by Magistrate Azore to overrule a no-case submission made by his lawyers.

Both courts threw out his application.

According to the charge, between May 18, 2015 and May 29, 2015 while being a bailee, in his then capacity as Attorney General, he fraudulently converted 14 Commonwealth Law Reports valued at $2,313,853, property of the Ministry of Legal Affairs, to his own use and benefit.

He is out on self bail.

In its ruling, the Court of Appeal, like the High Court, held that it will not intervene in the matter as the trial proceedings have already commenced before the Magistrate.

The Court also held that though it can exercise its supervisory jurisdiction to review such a decision by a Magistrate, it will only do so in extreme and limited circumstances.

Nandlall’s lawyers, among other things, had contended that the charge, Larceny by a Bailee, instituted against him is an unknown offence, and therefore it is in violation of Articles 40, 144(4) and 149(d) of the Constitution of Guyana.

The Chief Justice, however, did not agree. In fact, she ruled that Section 165 of the Criminal Law (Offences) Act makes provisions for such a charge.

Before the Chief Justice, Nandlall’s lawyers had taken issue with the Magistrate not giving reasons for her decision to overrule the no-case submission. In this regard, the lawyers contended that the Magistrate was in violation of Section 15 of the Judicial Review Act.

It states: “It is the duty of any person or body making an administrative decision, if requested in accordance with this section by any person adversely affected by the decision, to supply that person with a statement setting out the findings on material question of fact, referring to the evidence or other material on which those findings were based and giving the reasons for the decision.”

However, the Chief Justice held that Magistrates usually give reasons for decisions at the end of trials via a Memorandum of Reason.

The Chief Justice pointed out that the Magistrate was not in violation of Section 15 of the Judicial Review Act, which speaks of reasons for handing down administrative and non-judicial decisions.

Nandlall was previously reported as saying that when he took up the post of Attorney General, he did so at a loss and it was for that reason he agitated for the State to pay for the Law Reports. He had said that the arrangement received the blessings of the then Head of State, Donald Ramotar.

However, investigators are contending that because the books were bought with State funds, they cannot be the property of Nandlall and, in fact, the State should not have entered into such an arrangement in the first place.

The Ministry of Legal Affairs is further contending that there is no evidence of an agreement between Nandlall and Ramotar and, even assuming that there was such an agreement, the use of public funds in this manner is a flagrant violation of the Financial Management and Accountability Act. Nandlall was charged after SOCU, an arm of the Guyana Police Force, completed investigations.