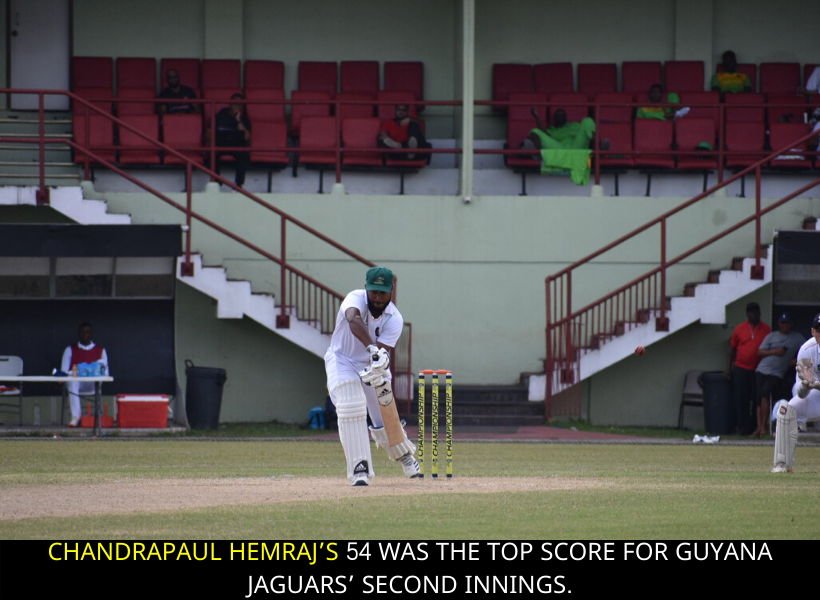 An all-round team performance from the reigning CWI Four-day Champions, the Guyana Jaguars, has pushed them on the brink of victory at stumps on day three of their clash against the Trinidad and Tobago Red Force at the National Stadium, Providence.

After openers Chanderpaul and Hemraj resumed the Jaguars second innings unbeaten on 29 and 22 respectively on Saturday morning, Chanderpaul only managed to add four more runs falling LBW to Bryan Charles for 33.

Jaguars skipper Leon Johnson joined Hemraj and together they guided their side to 103 before Hemraj was bowled by Darren Bravo for a well composed 54 which spanned 89 deliveries and included five fours.

Johnson would follow shortly after for 15, LBW to Charles but Christopher Barnwell and Vishaul Singh combined for a 43-run partnership before the former was dismissed by spinner Yannick Ottley for 21.

Facing an uphill task in their second innings, the T&T Red Force got off to a bad start as Keon Joseph had opener Keegan Simmons edging to wicket-keeper Anthony Bramble for a duck to leave his side at 1-1, skipper Darren Bravo who was bowled for just one run in the first innings was dismissed via the same route by Joseph for two runs as T&T looked set for a repeat of their first innings.

However, opener Jeremy Solanzo along with Jason Mohamed both got starts to guide Red Force from 5-2 to 67-3 when Solanzo fell LBW to young seamer Kevin Sinclair for 37 (6x4s).
This sparked another middle-order collapse as Mohamed (4x4s) was bowled by Versammy Permaul for 33.

Joshua DaSilva became Permaul’s second scalp, caught by Johnson for 8, he was followed by Yannic Caraiah who managed 27 before Devindra Bishoo trapped him LBW to leave Red Force on 117-6.

At the close of play, Ottley was not out on 17 along with Akeal Hosein who is unbeaten on 5 with T&T Red Force on 122-6 (46 Overs). They will need nothing short of a miracle to chase down a further 281-run deficit to win the match with four wickets in hand.

Permaul has figures of 2-27 (14 Overs) while Keon Joseph claimed 2-15 (6 Overs) and Bishoo along with Kevin Sinclair snared a wicket apiece.

Play will resume at 09:30hrs with the Jaguars looking to hunt down Red Force’s remaining four wickets and claim an outright victory.