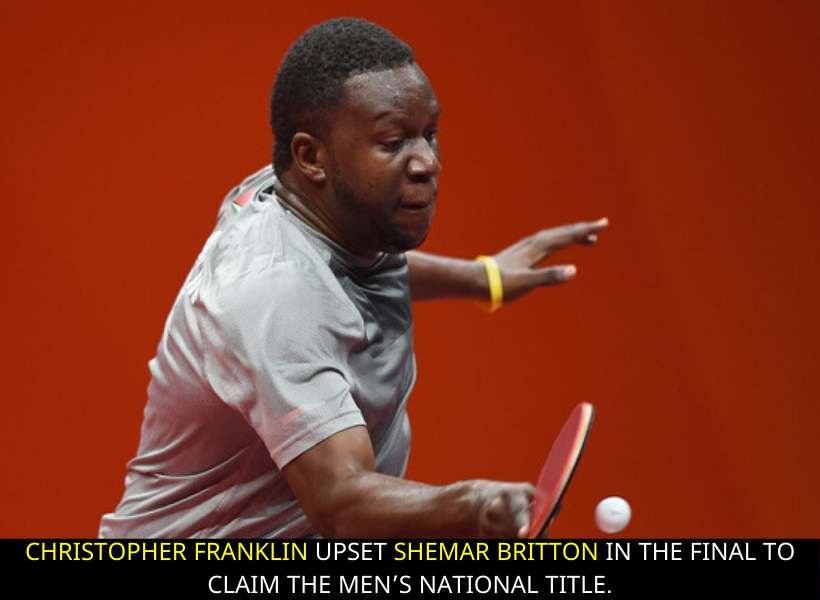 In a day filled with epic battles, Franklin defeated tournament favourite Shemar Britton in the Men’s final just after 22:00hrs on Sunday night at the Cliff Anderson Sports Hall (CASH) on Homestretch Avenue.

The final was a five game thriller as the match ended 3-2 in favour of Franklin; he got off to a flyer opening up a two game advantage as he took them with scores of 11-6 each, however Britton stormed back to draw things level taking two games in scores of 12-10 and 11-7.

But Franklin held his nerve to take the decider at 11-7 and claim the Men’s national title.

Earlier in the afternoon, Franklin had a relatively easy path to the final while Britton was dominant.

Arguably the match of the day, the U-21 Men’s final produced an epic earlier in the night as Elishaba Johnson claimed the title with a 4-2 win, narrowly avoiding a comeback defeat at the hands of a resurgent Jonathan Van Lange.

Johnson had opened up a 3-0 gap (11-7, 11-5 and 11-5) and seemed on course for a straightforward win but Van Lange was full of heart and stormed back to claim two games at 11-8 and 11-8. Heading into the sixth game, Van Lange looked as though he was on course to level things as he had a 10-8 lead on Johnson, but the latter fought valiantly to take things into deuce. At this stage, the small gathering of spectators was on the edge of their seats and first Johnson won an advantage but conceded immediately after, however he held his nerve and won two more points to take the match and title at 13-11.

Natalie Cummings was crowned the Women’s champion without much competition as she racked up 6 points in the round robin format while Thuraia Thomas and Crystal Melville settled for second and third respectively.