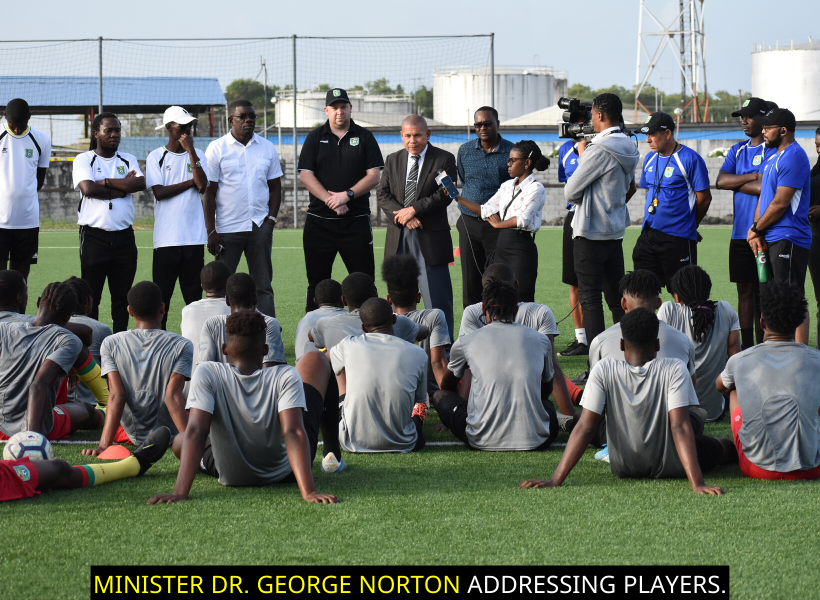 “I haven’t seen you perform in a match situation but just seeing you in action today makes me feel so proud,” said Honourable Minister of Social Cohesion, Dr. George Norton, during a visit to the training session of the National U20 and Senior Men’s National team on Friday.

The respective teams trained at the GFF’s National Training Centre, Providence and are preparing for Concacaf Men’s U20 Championship in February and the Concacaf Gold Cup Qualifiers in March.

Minister Norton said he is happy about football administration in Guyana and renewed the Government’s commitment to sport development in Guyana: “I have confidence in your administration particulary because of their track record, the results we’ve been having in football both at the level of the senior and as well as the junior, both male and female, and I am happy. I want to let you know that your government will do everthing it can to support you and not only help in providing the infrastructure but also the opportunities for you to live that good life like His Excellency promised the nation.”

“I urge you to remember that all of this 83,000 square miles are depending on you and we look forward to more success, much more than you’ve had in the past not only at the personal level but also at the national level,” the Minister concluded.
In briefing the Minister about the technical programmes, Technical Director Ian Greenwood highlighted that the combined team has players who have been part of the GFF Academy Training Centres (ATCS): “A number of players in this group have come through the GFF Academy Training Centre so we have players like Omari Glasgow, Marcus Wilson and such players who have been part of Guyana’s first ever youth international tournament in 2017 and they are now regularly training with the senior men’s national team. We’re very excited for both the male and female side. They’ve linked perfectly well with coach Maximo’s programme for the senior team. I think as long as we invest in the infrastructure, coach education, capacity building and give young players exposure and opportunities, we’ll start becoming a real threat in the CFU Region and looking to export players to the top leagues across the world.”

Guyana Senior Men’s National Team is set to play Barbados on March 26 and 31 respectively as the country seeks to qualify for the 2021 Concacaf Gold Cup. The first match of the two-round qualifier is scheduled for Barbados at 19:00hrs while Guyana will be looking for home-court advantage in the final match scheduled for the National Track and Field Centre, Leonora at 20:00hrs.
The National U20 team is on the final lap to compete at the Concacaf U20 Men’s Championship scheduled for Nicaragua from February 15 – 23, 2020, and Guyana has been placed in Group A with St. Vincent and The Grendadines, Montserrat, US Virgin Islands and host Nicaragua.
Present at Friday’s visit were GFF’s President Wayne Forde and staff members of both teams.