Home Politics Guyana Elections 2020 PPP vows to sanction any of its members guilty of flouting ERC... 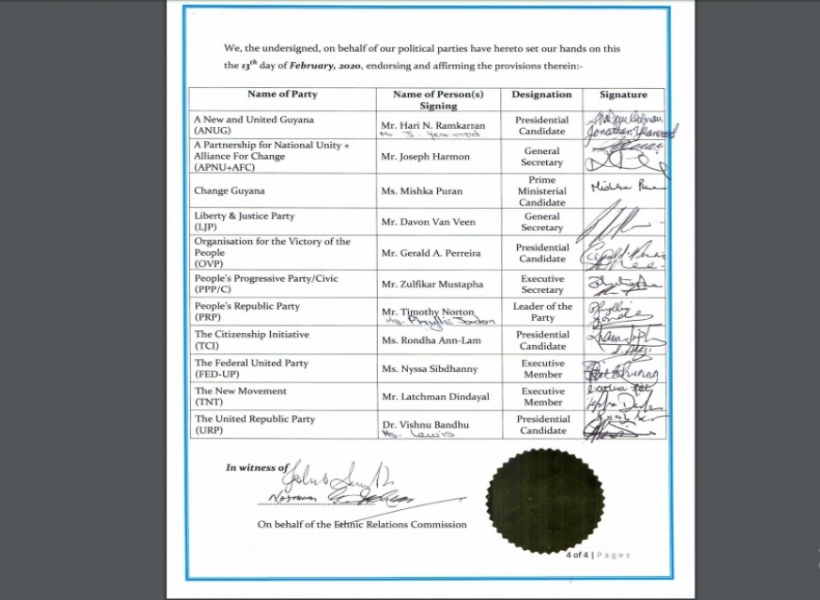 The Ethnic Relations Commission (ERC), this morning, brought into effect its Code of Conduct for parties contesting the March 2 Regional and General Elections. The People’s Progressive Party (PPP/C) has committed to the code, saying that should any of its members be found guilty of contravening the pact, they will be sanctioned and chastised.

Delivering the party’s position this afternoon was its leader, Bharrat Jagdeo, who called on other political parties to commit to the same.

“We intend to abide by the provisions of this Code of Conduct. We’ve made it clear that people should refrain – any speaker, who speaks about people’s gender, or their race or religion on the platform. Any PPP speakers will be sanctioned by our party, chastises and publicly denounced. I hope that APNU (A Partnership for National Unity) and [its leader, David Granger] can say the same,” he said.

Both parties have been flagged in the past by the ERC for transgressions during the campaign trail.

Jagdeo said that the Code speaks to the use of threatening language, disruption other parties’ activities, tearing down of flags among other things. He is now calling on the commission to enhance its monitoring now that a commitment has been given by all parties.

“Now that the ERC Code of Conduct has been signed, we expect to see enhanced monitoring from the ERC and some more aggression on their part to deal with some of these transgressions, and that the parties themselves will…Change their behaviour,” he said.

Jagdeo noted a stipulation in the code that talks about the upholding of the Constitution of Guyana with specific reference to article 38 (g): “Public Service to be free from political influence”.

The party leader said he is hoping that this proviso will address the issue of officials, who head various government agencies, campaigning at political rallies. He also stated that the stipulation should also debar the state-run media outfits from operating in a “partisan” manner.

He said that this requirement has to be seen as crucial to the ERC since he claims that it is the first to be mentioned on the Code.

The Leadership and membership of parties have also agreed to uphold other provisions of the Constitution with specific reference to the following articles and Acts: article 146, Protection of the freedom of expression; 147, Protection of freedom of assembly, association and demonstration; 149, Protection from discrimination on the grounds of race etc; 160 (A), Political parties prohibited from causing ethnic division; The Racial Hostility Act; and The Representation of the People Act.