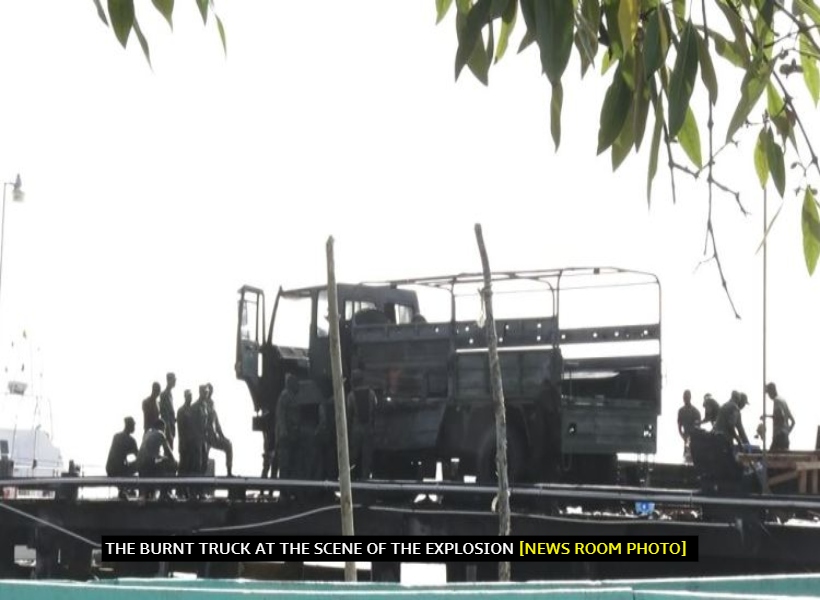 Two of the Guyana Defence Force (GDF) ranks are in critical conditions after sustaining burns about their body following an explosion of fireworks at the Coast Guard’s base in Riverview, Ruimveldt, Georgetown earlier today.

Three other GDF ranks and about two other persons sustained burns about their bodies but they are said to be stable. The victims are all hospitalized at the Georgetown Public Hospital Corporation.

When contacted, Chief of Staff of the GDF, Patrick West, confirmed the incident but refused to divulge further information.

According to information received, the Coast Guard ranks were loading fireworks from a truck onto a pontoon which they were then going to take close to the Stabroek wharf to light tonight in celebration of Guyana’s 50th anniversary.

It is unclear how the explosion occurred but this News Agency has been informed that everyone who was close to the truck was injured and had to be rushed to the hospital.

Fire Chief, Marlon Gentle was seen visiting the scene as his ranks put out the blaze.

President David Granger visited the injured ranks at the GPHC. He said that the Guyana Fire Service along with the GDF’s Chief of Staff will be conducting an investigation to determine how the fireworks went off.

The President said that the injured ranks are experts who have received training overseas. The fireworks were imported.