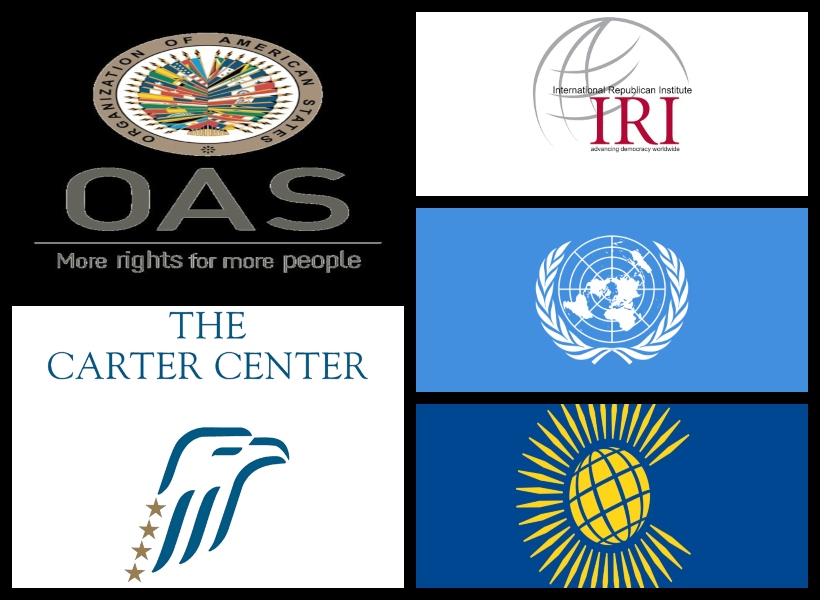 Elections Observers Missions (EOM) from the Carter Centre, Commonwealth Secretariat, the United Nations (UN), the Organization of American States (OAS), the International Republican Institute (IRI), and many other international organizations are bounded by certain international code of conduct and principles.

The aforementioned organizations and over a dozen others have signed on to these principles and code of conduct. The Caribbean Community (CARICOM) is also looking to adopt them in an effort to strengthen its EOM.

Anyone who fails to adhere to these principles and code of conduct can face serious sanctions, including dismissal from the EOM. But this can only happen after the findings of an investigation.

The APNU+AFC government, among other things, has accused Former Jamaica Prime Minister Bruce Golding, who was the leader of the OAS observer mission to Guyana’s 2020 elections, of being biased, partisan, lacking credibilty, and as having unquestionable links to the Opposition People’s Progressive Party Civic (PPP/C). 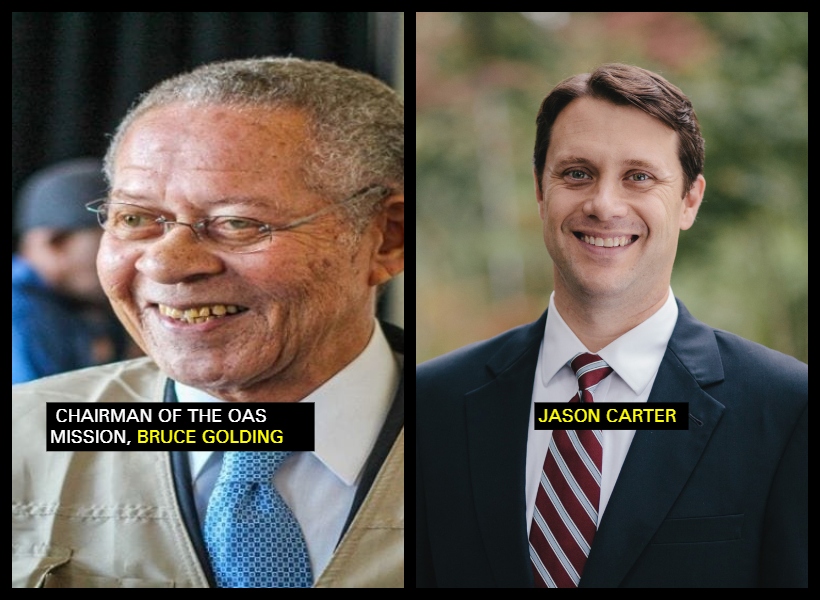 The government, in an official statement,  went so far as to say that Golding should not even be taken seriously and that he has been a close friend of  Leader of the Opposition, Bharrat Jagdeo and a private house guest to him, prior to serving as head of the OAS Observer Mission here.

Apart from that, certain government agents have taken to social media to level similar allegations against the Carter Centre EOM, which was co-lead by Jason Carter, the grandson of former U.S. President, Jimmy Carter.

There have been photographs circulating on Facebook of members of the Carter Centre EOM being in the company of certain PPP/C members at Freedom House.

However, to date, government has not issued an official statement in that regard.

The COVID-19 Task Force, for which incumbent President David Granger has the final say, has again and again refused to grant Carter Centre permission to return to Guyana to observe the national recount of all ballots cast in the 2020 elections currently ongoing at the Arthur Chung Conference Centre.

Its reasoning for continuously denying Carter Centre, and the IRI entry are the international travel restrictions due to the COVID-19 pandemic.

But the very COVID-19 Task Force has granted special permission for not one, but around six flights transporting oil workers from Europe, U.S.A, the U.K, Canada, and other countries, to land here.

President Granger has insisted that the high-level CARICOM team is best suited to scrutinise the recount exercise as their work meets international standards, and has requested of the Carter Centre and IRI to respect government’s legitimate decisions.

According to The Declaration of Principles for International Election Observation and the Code of Conduct for International Election Observers, since elections observers are important in order to provide an impartial and accurate assessment of the election processes for the benefit of the people of a country, much therefore depends on their integrity.

They must not express or exhibit any bias or preference in relation to national authorities, political parties, candidates, referenda issues or in relation to any contentious issues in the election process.

Observers also must not conduct any activity that could be reasonably perceived as favoring or providing partisan gain for any political competitor in the host country, such as wearing or displaying any partisan symbols, colors, banners or accepting anything of value from political competitors.

According to the Code of Conduct, elections observers must respect sovereignty and international human rights.

It states that elections are an expression of sovereignty, which belongs to the people of a country, the free expression of whose will provides the basis for the authority and legitimacy of government.

It also states that the rights of citizens to vote and to be elected at periodic, genuine elections are internationally recognized human rights, and they require the exercise of a number of fundamental rights and freedoms.

Election observers are required to respect the sovereignty of the host country, as well as the human rights and fundamental freedoms of its people.

The Code of Conduct clearly outlines that elections observers must respect the laws of the country and the authority of electoral bodies.

It states, “Observers must respect the laws of the host country and the authority of the bodies charged with administering the electoral process. Observers must follow any lawful instruction from the country’s governmental, security and electoral authorities.”

The document continues, “Observers also must maintain a respectful attitude towards electoral officials and other national authorities. Observers must note if laws, regulations or the actions of state and/or electoral officials unduly burden or obstruct the exercise of election related rights guaranteed by law, constitution or applicable international instruments.”

In addition, elections observers must maintain accuracy of observations and professionalism in drawing conclusions.

The Code of Conduct specifies that observers must ensure that all of their observations are accurate.

Observations must also be comprehensive, noting positive as well as negative factors, distinguishing between significant and insignificant factors and identifying patterns that could have an important impact on the integrity of the election process.

It adds that observers’ judgments must be based on the highest standards for accuracy of information and impartiality of analysis, distinguishing subjective factors from objective evidence.

Observers must base all conclusions on factual and verifiable evidence and not draw conclusions prematurely.

They also must keep a well documented record of where they observed, the observations made and other relevant information as required by the election observation mission and must turn in such documentation to the mission.