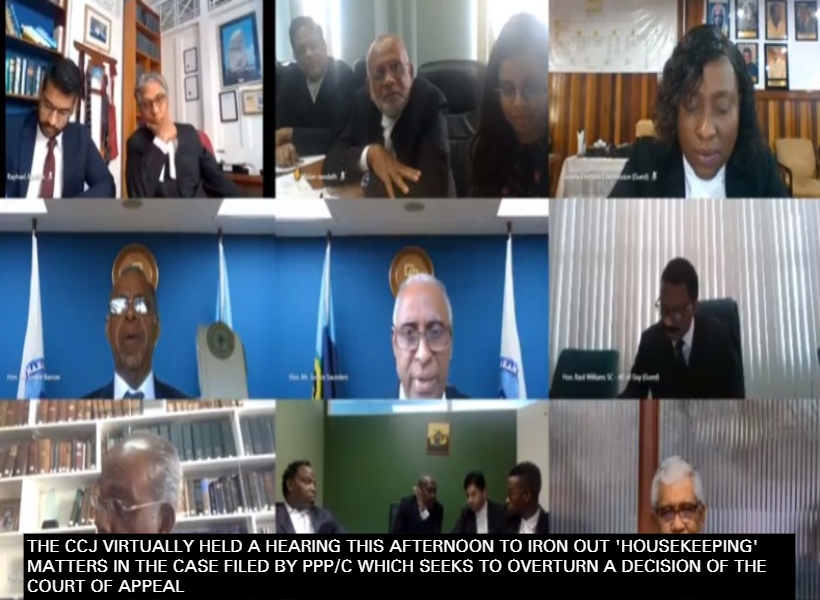 The Caribbean Court of Justice (CCJ), this afternoon granted an application by the A Partnership for National Unity + Alliance for Change (APNU+AFC), to make oral submissions amicus curiae in the case filed by PPP/C Presidential Candidate Irfaan Ali and the party’s General Secretary Bharrat Jagdeo which is seeking to have a majority decision by the Court of Appeal overturned.

Ali and Jagdeo are appealing the decision of the Court of Appeal delivered on Monday, June 22, 2020 in the case of government supporter, Eslyn David versus the Chairperson of the Guyana Elections Commission (GECOM), retired Judge Claudette Singh and Chief Elections Officer (CEO), Keith Lowenfield.

In the ruling, the Court of Appeal ordered that the words “more votes cast” in Article 177 (2) (b) of the Constitution of Guyana, be interpreted to mean “more valid votes cast” in terms of Order No. 60 of 2020 which governs the recount of all ballots cast in the March 02,2020 elections.

Jagdeo and Ali claim that the decision of the Court of Appeal was wrong for many reasons, including that it did not have the jurisdiction to hear and determine the case. Ali and Jagdeo are contending that the Court of Appeal fell into grave constitutional error in its ruling, and was plainly wrong on several grounds; they have moved to the CCJ to have the decision overturned.

During a Case Management Conference (CMC) held virtually this afternoon, the CCJ’s President Adrian Saunders noted that the case is one of national importance and said, “we are on a tight time-frame. Everyone would want this matter to be over as practicable as possible.” According to Justice Saunders, the major issues to be determined in the case is if the Court of Appeal had jurisdiction to hear the case, and if it did not, what are the consequences.

The CCJ fixed strict timelines for the parties to file submissions. Justice Saunders instructed that submissions are not to exceed 10 pages, as there are already volumes of submissions before the court. Parties were granted over this weekend, and up to Tuesday, June 30, 2020 to put in submissions.

Lowenfield, who is also a Respondent in the case, did not enter an appearance. The other Respondents, including representatives from several smaller parties, represented by Senior Counsel Ralph Ramkarran and lawyer Timothy Jonas, and General Secretary for APNU Joseph Harmon, were each allotted 30 minutes. The court is expected to wrap up hearing submission in the case at around 16:00hrs, next week Wednesday.

Justice Saunder promised that the court will endeavour to render its decision in a timely manner.

An order issued by the CCJ on Monday which blocks GECOM from declaring the results of the March 02,2020 General and Regional Election remains in effect, Justice Saunders noted.

The order goes to the effect, “The Guyana Elections Commission and its officers and agents take no step to prejudice the fair hearing of this application including but not limited to issuing a declaration of the results of the elections held on 2nd March 2020, until this Court issues final orders following the hearing and determination of the questions raised before this Honourable Court in the said application.”

Senior Counsel Douglas Mendes who is appearing for Jagdeo and Ali expressed that it is very disappointing that Lowenfield has not entered an appearance in the matter, although he has been served with all the documents, and order issued by the CCJ. Mendes asked that Lowenfield withdraw his report in which he invalidated 115, 000 votes “all of a sudden”, and purported to declare the coalition government for which Attorney General Basil Williams represents, the winner of the elections.

“We [CCJ] cannot undo what was done by the Chief Elections Officer. We did not intend in these proceedings to embark upon the substantive issues. The status quo on the ground must remain as it is so that the fair determination of the issues in the proceedings are not prejudiced,” Justice Saunders underscored.

David’s case was premised on Article 177 (4) of the Constitution and argued that GECOM failed to arrive at a final credible count under the terms of the Order No. 60 of 2020, and the amended order dated May 29, 2020, which governs the Recount of all ballots cast in General and Regional elections.

Attorney General Basil Williams, is of the firm conviction that PPP/C’s case has no prospects of success, and must fail, as the CCJ has no jurisdiction to entertain the party’s application. Williams contends that pursuant to Article 177 (4) of the Constitution, the CCJ is not conferred with authority to hear the matter.

Lawyers for David, during today’s hearing, sought to raise issues as to the CCJ’s jurisdiction to hear the case. Her lawyers have adapted the same arguments as the Attorney General.

However, Justice Saunder rejected attempts to make these submissions. Justice Saunders said emphatically, “We do not impose to drag out these proceedings by hearing preliminary points in a serial manner. We will hear preliminary points as we hear the substantive matters. Rest assured [the CCJ] is not going to have regard to anything being said outside the court and which is not being featured as a relevant part of these proceedings.”

Before wrapping up today’s hearing, the CCJ made it clear that it has not decided on the issue of jurisdiction.