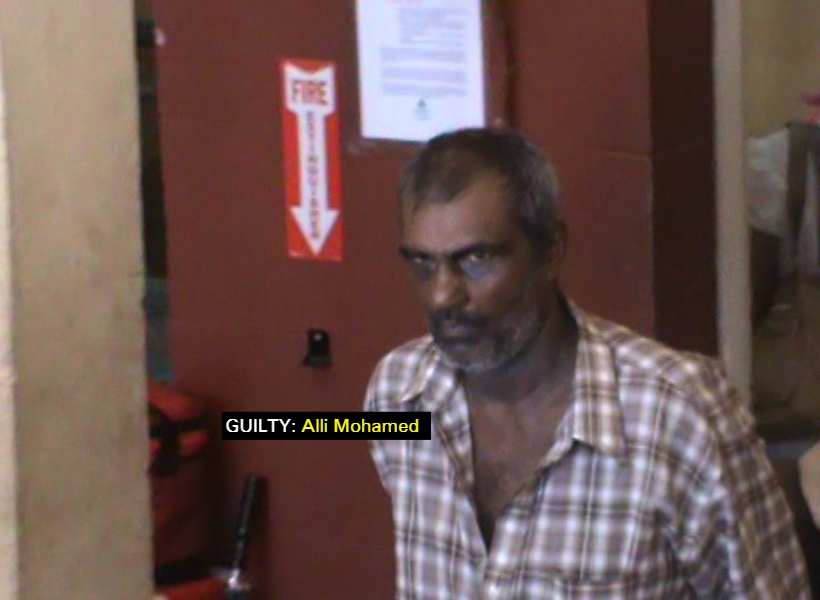 Alli Mohamed, who has been suffering from a prolonged period of mental illness, this morning pleaded guilty to killing his bedridden father, 83-year-old Mohamed Sulaymon. Alli Mohamed was arraigned at the High Court in Demerara before Justice Brassington Reynolds. The proceedings were done via Zoom.

Initially indicted for murder, Alli Mohamed, 43, opted to plead guilty to the lesser count of manslaughter, thereby admitting that on January 13, 2015, in the county of Demerara, he murdered his father. The indictment against Alli Mohamed was presented by State Prosecutors, Teriq Mohammed and Tyra Bakker.

According to the facts of the matter presented by the prosecutors, at the time of the incident, Sulaymon was bedridden while his son was known to have been suffering from mental illness which resulted in him being violent at times. During January 2015, Alli Mohamed was living with his father and sister, Shaliza Mohamed and her family at Lot 38 Parker Street, Providence, East Bank Demerara.

On January 13, 2015, at around 19:20hrs, Alli Mohamed was at home with his father, sister and her family. During that time, Shaliza called Alli Mohamed to give him his medication. According to her, when her brother came to her, his eyes appeared “wild” and before she could have given him the medication, he cuffed her to the head.

Her husband came to her rescue, and she left her home with her son to go and get help from the neighbours. When Shaliza left the house, her father, Sulaymon was in his bedroom lying in bed. According to one Devon Persaud, on the said day, he was upstairs in his home when he heard someone shouting “Mark, help, help, Alli killing his father.”

As a result, Persaud left his home and went over to Alli Mohamed’s home where he saw him in the bedroom beating his father with a piece of greenheart wood, while he laid in bed. Persaud called out to the mentally ill man, and he came to him. This led to Persaud taking the wood away from him, and carrying him downstairs.

Police arrived and arrested Alli Mohamed. His father was taken to the Diamond Hospital and transferred to the Georgetown Public Hospital Corporation (GPHC) where he later died. His cause of death was given as multiple injuries: multiple rib fractures with haemothorax; lacerated liver, fractured arms, bone, head and cutaneous lacerations.

Alli Mohamed, who was represented by lawyer Ravindra Mohabir, returns to court on Monday, July 20, 2020 for presentation of probation report, plea in mitigation and sentencing.