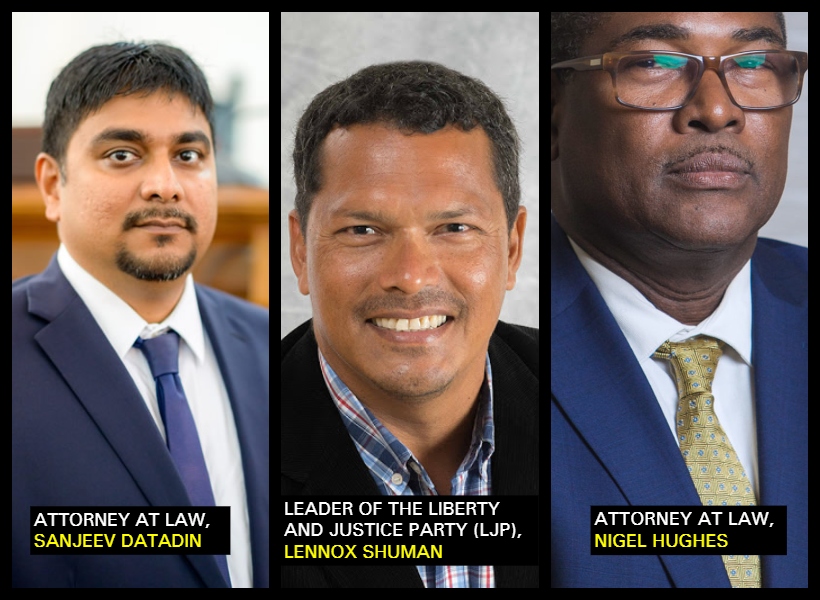 Leader of the Liberty and Justice Party (LJP), Lennox Shuman, has drawn to the attention of the Court a contention that his former lawyer Nigel Hughes acted contrary to the applicable code of conduct, when he violated the confidence that was entrusted upon him as a lawyer. Shuman is also claiming that Hughes is now in a position of conflict of interest. However, Hughes, a prominent and well-respected attorney, is vehemently rejecting the allegations and said that he is now regretting the kindness he extended to Shuman.

Earlier today, attorney at law, Sanjeev Datadin, acting on behalf of Shuman, filed an application asking the court to make an order that Hughes and his associates must refrain from representing the Guyana National Newspapers Limited (GNNL) and its editor, Nigel Williams in a matter filed by Shuman earlier this year.

As Guyana Standard understands, in the lead up to General Elections earlier this year, GNNL, otherwise referred to as Chronicle, “launched an attack” on Shuman.

According to Datadin, Chronicle was trying to assassinate Shuman’s character in an attempt to limit the heartening support Shuman was receiving from the indigenous community. Datadin said that the assault from Chronicle lasted for weeks, hence Shuman sued for libel. Chronicle then solicited the expertise of Hughes, Fields and Stoby to handle the matter.

Datadin said, “Shuman felt betrayed when he learned that Hughes was representing Chronicle because some of the libel by Chronicle, a lot of it actually, included the exact matters for which Nigel Hughes previously represented the interest of Shuman.”

Essentially, Shuman is contending that Hughes represented his interests in matters and is now representing another party that used those very matters against him in a libelous manner. Datadin said that the matters included charges of assault and disorderly behavior.

He noted too, and this is reflected in the writ, that Shuman was found guilty of disorderly behavior. Datadin said that Shuman then ordered Hughes to appeal the matter. That appeal is pending, according to Datadin.
Guyana Standard has seen copies of correspondences between Hughes and Shuman. Shuman wrote pointing out the perceived conflict of interest and asked that Hughes and his associates withdraw representation.
Hughes responded asking Shuman for evidence that his firm was consulted in the matters referenced by Shuman. Also, Hughes noted that the legal assistance given to Shuman in the past was pro bono. Commenting on this, Datadin said that it doesn’t matter if the work was pro bono “Once you act on behalf of a client pay or no pay, you are their lawyer and you have a privilege lawyer, client relationship.”

Guyana Standard contacted Hughes who denied the allegations of conflict of interest. He said that Shuman is an “absolute ingrate” and his behavior in this matter is indicative of the kind of politician he is.

Hughes said that he met Shuman “in the days when I was doing heavy pro bono work for the indigenous community.”

He further stated that Shuman was introduced to him by an indigenous peoples’ advocate, with whom he usually works closely for the benefit of the community.
Hughes said, “My firm would usually assist the indigenous community in any form possible.”

Hughes stressed that Shuman was not getting along with some people and was arrested on a few occasions.

“I sent people from the firm to help him out. We never had a formal relationship. I never signed a contract with Mr. Shuman. I never took a single cent from Shuman. I was just helping.”
Further, Hughes said that when the National Toshaos Council had to move from where they were housed, he helped, after Shuman asked him to intervene. “The government told them to move and they could not afford rent anywhere else, I asked my sister to reduce the rent on one of the family properties just so the council could afford the rent to be able to stay there. Up to now, they are there.”

Hughes said that his firm paid for an “entire law degree of an indigenous girl and even hired her. That is the nature of our relationship with the community.”
Hughes lamented that Shuman has now proven that “generosity has consequences.”

“It is very unfortunate that the leader of the indigenous community political party would mistake generosity for any sort of contractual relations or obligations. I have no conflict of interest. But this is indicative of the type of politician he is, he is an absolute ingrate because there is no way that I ever assisted him on the basis that I had any formal relationship with him.”

Hughes denied the claim that he engaged in any appeal on behalf of Shuman.
He asserted, “I challenge him to produce any document to say I appealed the matter and I challenge him to prove that I was ever in court.”
In the court document seen by Guyana Standard, Shuman indicated that due to COVID measures he was not able to access any of the pertinent court documents about the appeal.

In any case, Hughes clarified that he is not the one handling the case of Shuman V GNNL. He said that the case is being handled by one of his senior associates at the firm, Jed Vasconcellos.
He added, “Our firm represents the Guyana National Newspapers Limited. We have been doing so for a while. I am not even handling the case, it is another senior associate who is handling it. It seems as if he is afraid of the capacity of Mr. Jed Vasconcellos that he is using red herrings like a conflict of interest. If he is so confident he should not worry about who appears.”