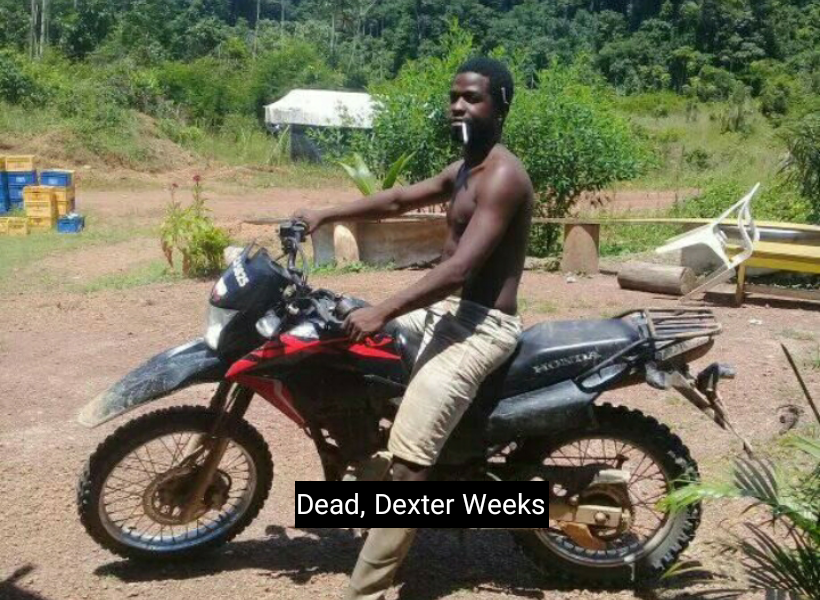 A 2-year-old boy is now traumatized after seeing his father—Dexter Weeks—commit suicide early this morning.

The incident occurred in a far-flung hinterland area called “Granny” in Region 8.

Therrish Oconnor, the reputed wife of the deceased, told Guyana Standard that around 7:00hrs this morning, she heard a gunshot while she was speaking with her mother on her cellular phone. Oconnor said that she looked around and saw Weeks lying motionless outside the house. She then noticed her son staring at his dead father.

Oconnor said that she is at a loss as to what could have driven Weeks to the point of suicide.

She told Guyana Standard, “We wake up this morning we ain’t had no argument or nothing. We said good morning to one another. I was talking to my mother, and just as I go to turn off the phone I hear a gunshot. When I look around I saw Dexter on the ground and I start hollering and people start coming.”

Oconnor, who also goes by the name Angel, said that she refused to have sex with the deceased last night but she cannot say with certainty that that is the reason for his action.

“I know I did not give him anything last night but I wake up this morning good. We said good morning to one another and everything. This is the first time I saw the gun. I do not know the gun name I never see the gun before,” Oconnor said.

She noted too that he was drinking brown rum and coke this morning but she did not see that as a cause for concern.