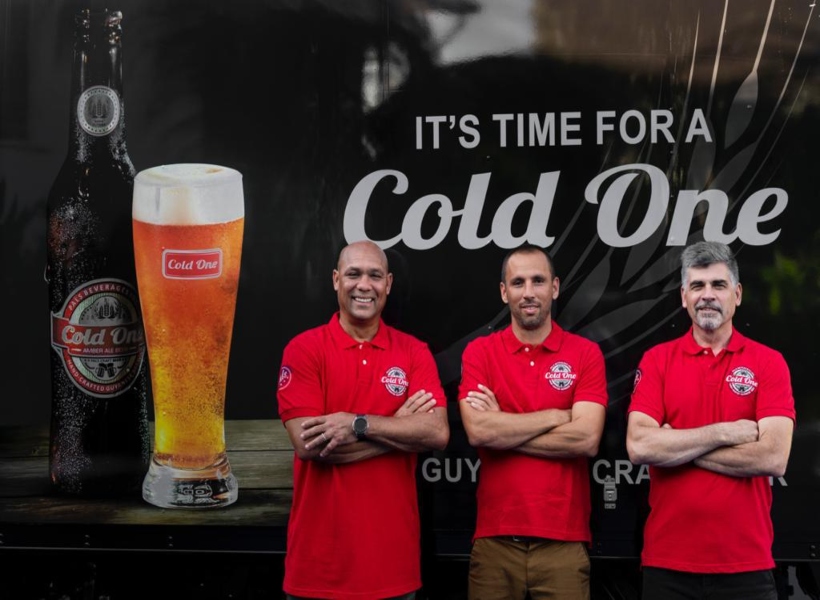 While the local beer market may be dominated by two major companies, Banks DIH and Ansa McAL, this has certainly not deterred three Guyanese pals from dreaming big and offering citizens a more delectable option to suit every occasion. Referred to as Alan, Pierre and Stuart, these three lads have joined forces to create a company called PALS Beverage which serves as the launching pad for “A Cold One”–the nation’s first and only craft beer with its brewery nestled in the heart of the city.

Even though the restrictions of the COVID-19 pandemic have stymied efforts at an official launch, Pierre, Alan and Stuart, have managed to successfully get the unique taste of their new beer into a number of stores and bars of popular hotels. In fact, it is available nationwide.

The PALS Beverage owners were keen to note that their beer offers a combination of ale and beer, a blend that is definitely new to Guyana.

The beer also represents everything beer lovers crave which is a beer that is refreshing, smooth on the palate, a delicious hoppy tang with an eye-catching clear amber colour. As a medium-bodied beer, the alcoholic composition is just right for anyone the partners noted.

The PALS were keen to note as well that a lot of hard work and passion went into the crafting of the new beer. In fact, their efforts started since 2018.

After many experiments, testings, and tastings, their first signature beer “Cold One” was finally born. The final product has been on the market for well over four months too.

In a statement to the press, Alan said that A Cold One is exclusive since it is brewed from the very best grains, unlike rice used in most beers. He said that rich grains used in the process are Brewers, Munich and Caramel Malts. Added to the blend he said, is yeast which is the defining ingredient in craft beer. Alan, who has an engineering background, said that the type of yeast used in the brewing process has a huge influence on the style of beer produced.

PALS also uses a Fresh Hop and a special yeast which is imported all the way from Northern Europe. The processing is done in a Micro-brewery located in Georgetown which houses state of the art equipment and extreme care is taken in the different stages of the brewing process.

Guyana Standard understands that these now very fine craftsmen will soon be venturing into different types/flavours of beers in the future.