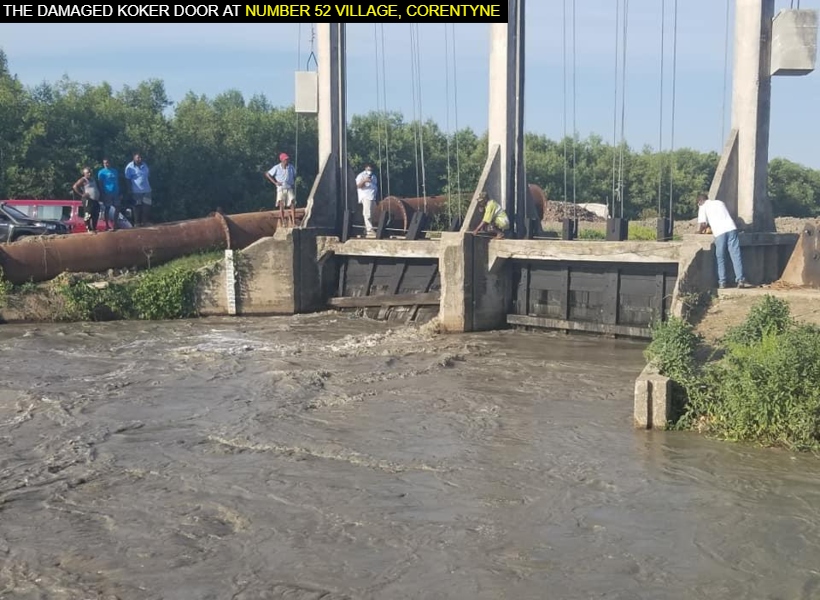 Emergency works are now underway to fix the Number 52 Village, Corentyne koker, that was damaged due to high tides yesterday.

Region Six Chairman David Armogan, along with regional officials, visited the koker to get a first hand view as to the damages caused.

During the visit, he disclosed that the National Drainage and Irrigation Authority (NDIA) has begun doing remedial works in a bid to seal the breach.

“NDIA has been engaged to do some remedial work and to block off the breach section. In the meantime, we have to stop the water from going through that door because remember this is high tide, and it is moving very fast.”

He noted that villages from Number 52 to Number 74 and surrounding areas would be flooded if the works are not completed in a timely manner.
“Salt water is going to get into the cultivation system, and that is going to spell trouble for rice farmers and other cash crop farmers.”

Initially, Minister of Agriculture Zulfikar Mustapha, during a visit to the koker earlier in the month, pointed out that it was poorly done. As a result, he recommended that works be completed on the koker to prevent any more breaches.