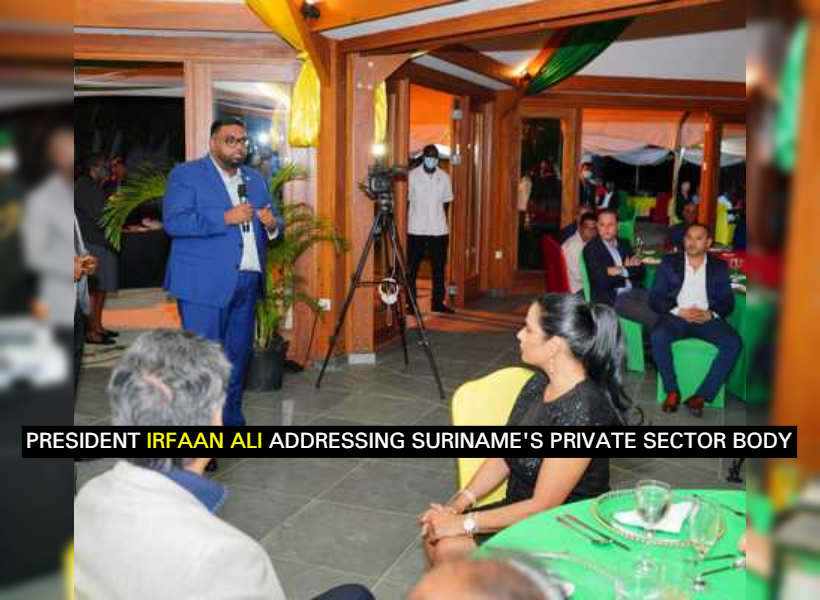 President Dr Irfaan Ali is confident that Suriname and Guyana governments have the political will to enable the private sector in both countries to expand and grow.

The Head of State gave this assurance on Wednesday evening during a reception with the Suriname Private Sector to culminate his three-day State Visit to the neighbouring nation.

“Our task as policymakers is to ensure we create the environment, an enabling environment and framework, so that the private sector can flourish and grow; so that we can create opportunities for the private sector to expand… I want to assure you tonight that we have the political will. And we have established the political framework to get it done. And with your help, we can move it rapidly forward.”

President Ali pointed to the pace and coordination between the two countries on the Corentyne River Bridge project. He urged the private sector representatives to make the necessary linkages and connections to benefit from such development strategically.

“We want to see local content in that; we want to see the local private sector from Guyana and Suriname stepping up aggressively. Don’t wait on companies to meet you. You have a high commission and ambassadors here.”

He explained that while such projects may seem “overwhelming,” working in partnership will eventually build capacity, technological capability, and experience, which will then enable the private sector to grow.

TWINNING ECONOMIES
President Ali announced that the two Heads of State are already in discussions to twin their economies, thereby achieving economies of scale. This, he said, will also reduce and remove existing hurdles and barriers to trade.

“The time has come. And sometimes, the media will not capture the essence of the story. But I want to assure you that in Guyana and in Suriname, we have the political will. We already discussed twinning our tourism product, making it easier for visitors to come to Guyana and Suriname; we have a huge diaspora.”

He said also high on the agenda are discussions to improve security between the two countries.

President Ali also emphasised that both Guyana and Suriname, as natural resource-based countries, understand that to avoid the Dutch disease, the economy must be broad-based and diversified.

The Guyanese Head of State further explained that in order to take advantage of the distinct competitive edge the two countries have with regards to food security in the region and CARICOM, it is imperative to “achieve the synergies” and to push the market together.

“We are not in competition. Every company has to have a competitive feature, that is how business is, but we are in cooperation mode.”

CONSORTIUMS ARE THE FUTURE
On this note, President Ali said that while the two countries do not have a long history of working in a consortium, the future requires this, given the investment potential.

He then urged the Private Sector representatives to be bold enough to embrace and defend the development agenda, particularly if it brings benefit to the people. The Private Sector, he emphasised, is heavily integrated into the political system and, therefore, must find its voice when things go right.

President Ali assured all that his presence and that of President Santokhi at the event signals their commitment to building the necessary networks and connections to move the integration forward.

“It is to let you know that we are serious and we are ready. We are bold enough to confront the challenges and the changes that are necessary. And this, I think, is what is important in confronting the future, the opportunities, the challenges, and the threats that we face.”

The President also announced that he has already advised his Cabinet to remove all the bureaucracy regarding collaborating and doing business.

In closing, he pointed to the benefits of a collaborative relationship moving forward.

“Guyana was able, seven years ago, to negotiate the largest carbon credit deal per capita in the world with The Kingdom of Norway. Imagine if we had done it together. Both Guyana and Suriname would have benefited. So in reflection, we have to see where we could have done things better and bring greater benefits to the people. At the end of the day, it is the people who must benefit and see the positive change.”