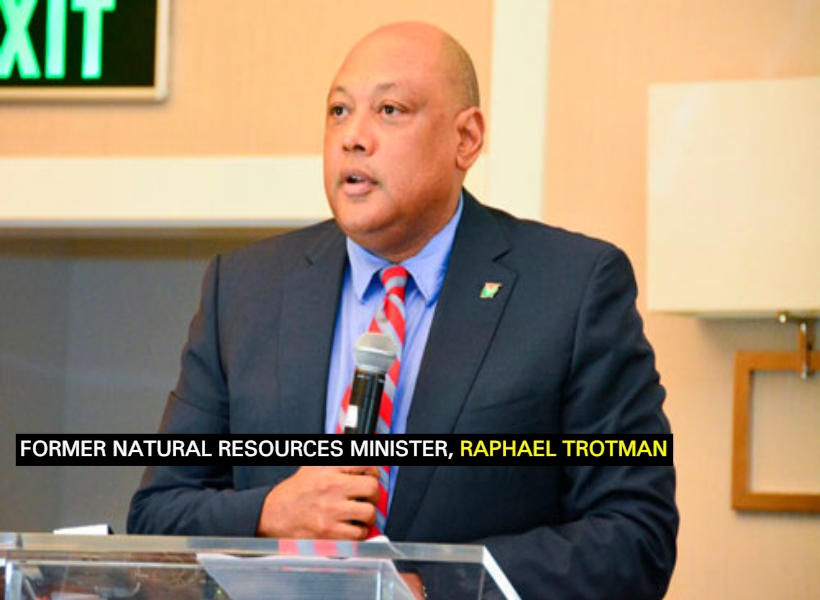 Guyana, like other members of the Extractive Industries Transparency Initiative (EITI), has another three weeks to comply with the latest requirement of the international body which states that all the beneficial owners of oil and mining concessions must be made public.
During his party’s latest press conference, AFC Chairman, Raphael Trotman said that he expects the government will be able to respect the new requirement since it “knows where all the skeletons are buried and must expose them.”
Trotman was keen to note that the APNU+AFC coalition regards Guyana becoming part of EITI as one of its proudest moments since the body requires transparency and accountability in the collection of revenues from the sector. He recalled that during his time as Minister of Natural Resources, there was some level of confusion surrounding the mining contracts since these appeared to be scattered across agencies such as the Guyana Geology and Mines Commission and the National Industrial and Commercial Investments Limited. Be that as it may, Trotman said that the PPP now holds the reins of power and therefore has the responsibility to bring these contracts forward.
The politician said too that while he is not sure if the disclosures of beneficial owners can be done by year-end in light of the pandemic, he stressed that they must be done as quickly as possible.

GUYANA/ EITI HISTORY
EITI is an international body that was established in 2003 with the aim of making it harder for governments and companies to hide the truth about the proceeds garnered from the extractive industries.
The companies in the extractive sector report on what they are paying the government and the government reports separately on what it received from the companies in the sector.
A report is then prepared by a Multi-Stakeholder Group. The document, among other things, will highlight whether the numbers data collected from the two add up or if there is an irregularity.
Head of the local EITI Chapter, Mr. Rudy Jadoopat has explained that Guyana must be praised for its efforts in recent years, which were all geared towards satisfying the EITI candidate sign-up requirements.
The official noted that the Government of Guyana had announced its commitment to implement the EITI Standards since May 2010. He noted that Guyana and EITI even signed a Memorandum of Understanding in 2012, which paved the way for Guyana to be assisted with its preparation of EITI candidacy.
He noted that the Inter-American Development Bank (IDB), the World Bank and the Carter Center provided assistance to the Government and supported its efforts towards EITI candidacy. Jadoopat said it is expected that this will continue.
Jadoopat added that the government, as stipulated in the International EITI Standard 1.4, has committed to working with Civil Society and Companies.
He said, “It has unequivocally and boldly announced its commitment to work with civil society and companies. Also, the government has agreed to ensure that there are no obstacles to civil society’s participation in the EITI processes. It agreed to refrain from actions which may result in narrowing of, or restricting public debate in relation to the EITI implementation.”
Furthermore, Jadoopat took the opportunity to encourage all to consider it their civilian duty to actively participate in the activities and work of the GYEITI.