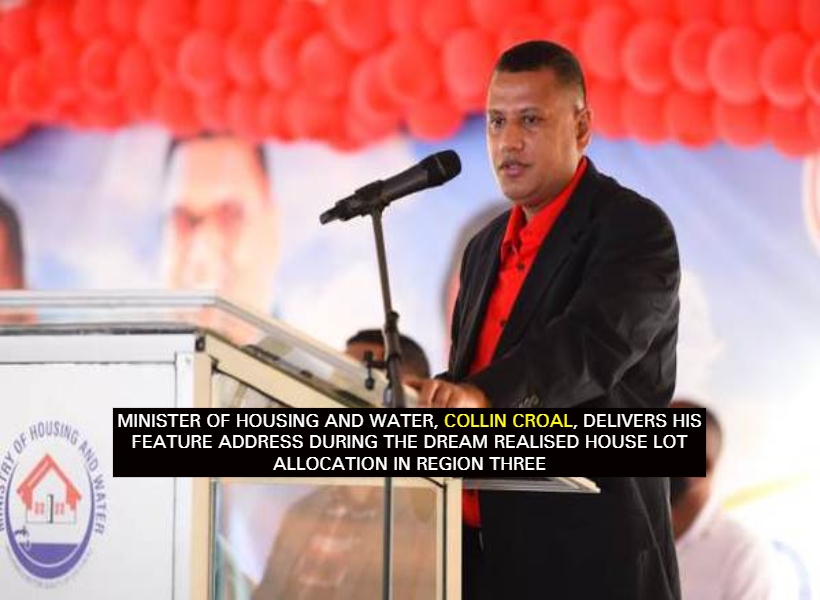 In the new year, residents of Essequibo Islands-West Demerara (Region Three) will benefit from a massive infrastructural investment for the provision of serviced house lots.

Minister of Housing and Water, Collin Croal, made this announcement in his address at Dream Realised: land allocation, which is being held at the National Track and Field Centre in Leonora.

“In just five short months since we came into office, more than $3 billion was allocated in the national budget to improve infrastructure in the new and existing housing areas…More than $5.1 billion will be invested here in Region Number Three for infrastructure works within the coming year,” he said.

Under the PPP/C Government, providing infrastructure in housing areas is a priority to ensure sustainable housing.

The lack of infrastructure in housing areas under the previous administration led to low occupancy as allottees were daunted by the prospect of moving into schemes without access to basic utility services such as roads, water and electricity.

Minister within the Ministry of Housing and Water, Susan Rodrigues, told Region Three residents that the PPP/C vision is to ensure high occupancy level through the relevant investments.

The infrastructure works will see the creation and upgrading of access roads and bridges and drainage and irrigation systems in housing schemes.

Meanwhile, Minister Croal outlined that the Guyana Water Incorporated (GWI) will be working closely with the Central Housing and Planning Authority (CH&PA) to ensure that the necessary water networks are also in place.

The Ministry’s current mandate is to provide 50,000 housing allocations to Guyanese over the next five years. To this end, the Ministry has already set in motion a house lot allocation exercise which targets 3,500 in Regions Three, Four and Six in 2020. This is approximately half of the lots distributed by the Coalition Government over five years.