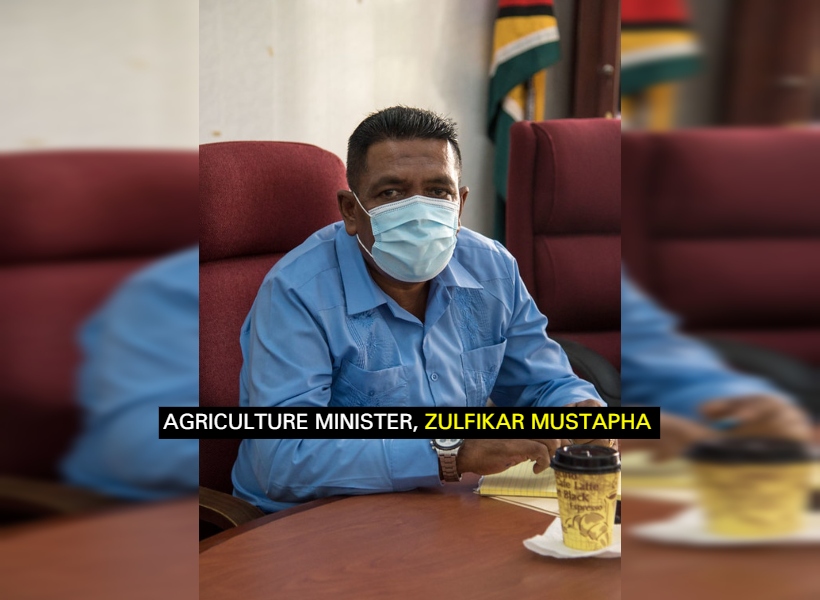 In keeping with his promise over the weekend, Agriculture Minister, Zulfikar Mustapha along with a team of officials from his Ministry met with farmers from Helena, Mahaica earlier today. The meeting saw rice farmers explaining the challenges they face with poor dams, uncleared canals, and other infrastructure that are in a deplorable state.

One rice farmer, Basil Jagasar, also known as Bassan from Helena, said many of the dams needed to be fixed. He said, “We need help. We are happy that you are here today. The trench is blocked up and water going into our farms. Minister look at this dam. Can farmers bring out produce on dams like this? It is worse at the back.”
Other farmers expressed similar sentiments about the need for urgent rehabilitation works to be carried out on other dams in the community while others expressed dissatisfaction with the way a recently constructed bridge was done. They said that the machines used to transport their produce from their farms were not able to cross the bridge because the rails were too narrow.
After listening to the farmers, Minister Mustapha said that a comprehensive report would be done for the area over the next few days to ascertain the amount of works to be done. The Minister said he expects to receive this report by Friday.

As for the bridge in question, the Minister said he has asked the National Drainage and Irrigation Authority to make the bill of quantities available so that he can closely examine the scope of the works. “When we are undertaking works of this nature, we have to ensure the stakeholders are involved in these projects at some level because they are the ultimate beneficiaries,” Minister Mustapha said.

Minister Mustapha also said it was disappointing that farmers had to bring the issue of substandard projects to his attention when engineers are tasked with monitoring these projects.

“I am in the process of revamping the engineering department of the NDIA to ensure the agency is more responsive and proactive. We cannot continue to do things haphazardly. We have to ensure that when these projects are done, they are done in a way that we can have value for the monies spent. Works have to be verified by our engineers before payments are made,” Minister Mustapha said.