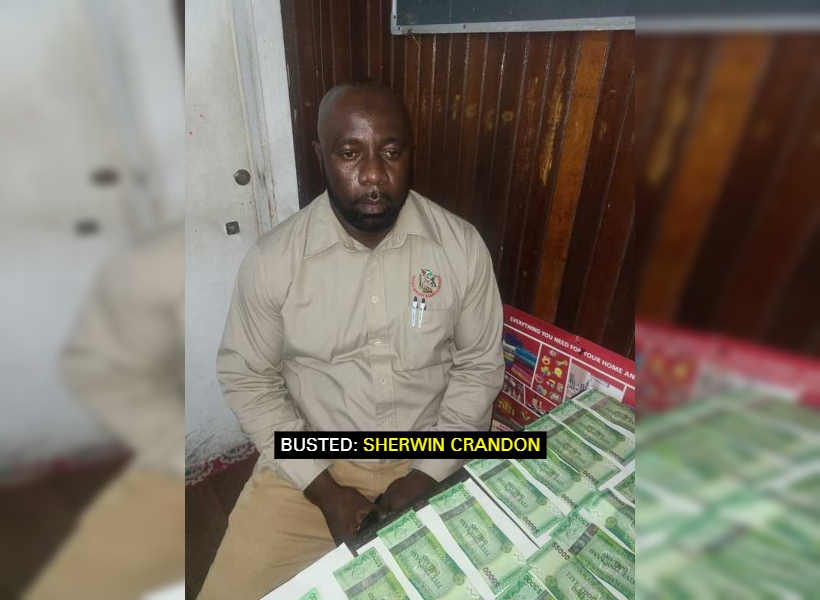 On Wednesday 19th May, 2021 a gold miner visited the Guyana Police Force’s Criminal Investigations Department (CID) Headquarters at Eve Leary, Georgetown and reported that back in 2019, he was charged by the Guyana Geology and Mines Commission (GGMC) for illegal mining at Blackwater, Mahdia.

He further added that on 19th May, 2021 the suspect (prosecutor) called him and told him he is willing to dismiss his case if he pays him $300,000, and if he does not comply, then he will be convicted for the offence. The gold miner said the suspect then gave him a location to meet him (a popular bar in Station Street, Kitty), and the date being 19th May, 2021 and the time being 16:00 hrs. As a result of that, a sting operation was executed.

On the said date at 16:30 hours, a party of Policemen, acting upon information arrested Sherwin Crandon, a 44-year-old male of George Street, Werk-en-Rust. Crandon is a prosecutor at the Guyana Geology and Mines Commission. A search was conducted on his person and the $300,000 Guyana Currency, in dimensions of $5,000 (GC) was found in his pants pocket. He was then told of the allegation, arrested and placed into custody.

The exhibit (money) was photographed in the presence of the suspect and then lodged at CID Headquarters.
The suspect was escorted to the Brickdam Police Station and placed into custody.