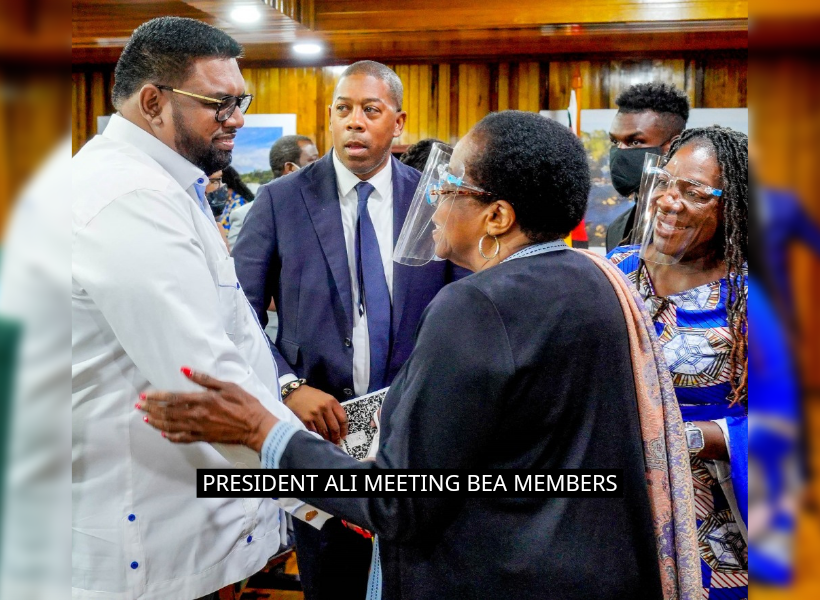 President Dr. Irfaan Ali yesterday afternoon reaffirmed his Government’s position and intention of crafting and executing policies that will benefit all of Guyana.

The Head of State and several members of his Cabinet met with a delegation from the Black Entrepreneurs Association (BEA) from the United States of America at the Office of the President.

President Ali told the gathering that his Government has been pursuing an agenda to improve the welfare and prosperity of all Guyanese.

“We have rolled out a number of programmes that seek to improve the living conditions, creating opportunities for every segment of the Guyanese population to advance and achieve their dreams and aspirations.”

He also pointed to Government’s programmes to ensure that the vulnerable sections of society are not left out in the country’s development agenda. He said that over the last year, his administration has been “aggressively” building on its promises after a protracted struggle for democracy following the March 2020 Elections.

“I want to thank the United States of America, and I know many of you would have played a part in ensuring that we remained on a democratic pathway so that the rule of law and democracy won at the end of the day. It was a struggle that all Guyanese embraced; it was a struggle that the Diaspora supported.”

He emphasised that it now rests on the collective shoulders of all stakeholders to ensure that Guyana never repeats its post-elections experience.

President Ali used the opportunity to point out that the resources from the oil and gas sector will be used as an impetus to build and fortify other sectors of the economy; these include enhanced focus on food security, the services sector, manufacturing and industrial development, among others.

The BEA delegates explained that they were grateful for the opportunity to meet with the Head of State and members of the Cabinet and to have the opportunity to engage in the conversation around diversity, inclusion, equity and justice, specifically as it relates to black entrepreneurs and those of African descent.

“We are grateful that you have commissioned efforts that will unify your administration’s efforts to not only bring attention but to bring resources to your business owners; so thank you,” Ms Frasier said.