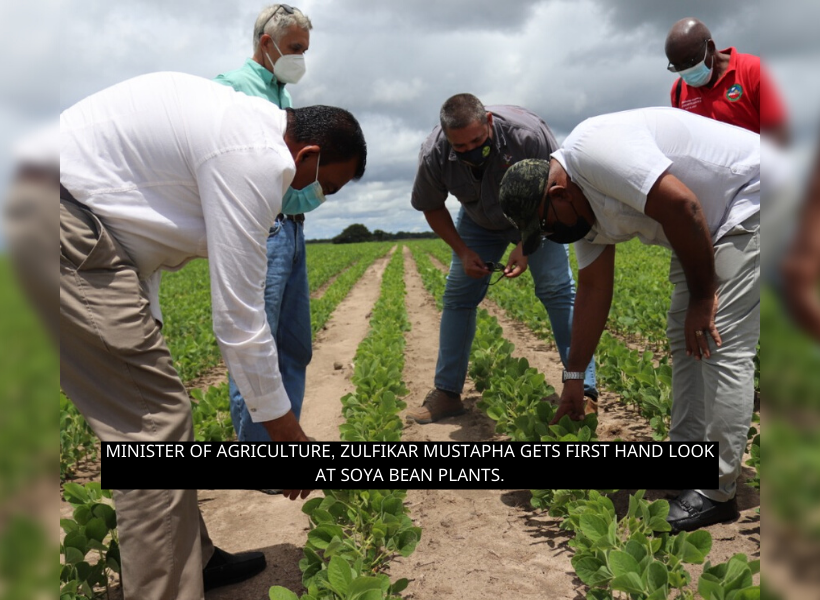 Earlier today, Minister of Agriculture, Zulfikar Mustapha and his team visited the Dubalay Ranch at Tacama to get a firsthand look at the “trial” corn and soybean farm.
Mustapha was welcomed by some of the members of the consortium that invested in the farm. Investors, Alex Mendes and David Fernandes took the lead in showing the Minister around.

As he was given the tour, Minister Mustapha did not shy away from expressing excitement. “This is revolutionary, and I am happy to know that it is all happening under my tenure,” he said.

During the walk about, the minister engaged the investors in extensive conversation regarding the challenges being faced as well as their prospects for the future. The Minister was heard reaffirming government’s “unweaving” support as he said it is in the interest of all that “we become self-sufficient.”
Both Fernandes and Mendes stressed the importance of the project and the prospects it holds.

Fernandes, the Assistant Managing Director of Bounty Farm Limited noted the poultry sector’s high dependence on imports for livestock feeds. The success of this project would see a significant reduction of cost of raw materials for livestock production and would this improve Guyana’s competitive advantage in the global marketplace.
Fernandes told the media that with the approval given to the project by President Irfaan Ali himself, the group knew that rapid efforts had to be made to get trails underway. He said that these trials are necessary for the gathering of data that will be used as guidance for the realization of commercial operation.

Fernandes explained that soya bean has already been planted on 115 acres of land. While only five acres have been utilized for corn. Those crops are expected to be reaped by the end of September. “Then we will plant again in November to catch the Christmas rains. We will try at that time to plant 125 acres each of corn and soya bean.”

Fernandes said that the journey to this point has not been without challenges but the investors remain optimistic and excited. He acknowledged the assistance of government, particularly the Ministry of Agriculture “in giving us the support we need.”
The pandemic highlighted the importance of moving towards self-sufficiency.

“So we see it as a challenge but with the help of the government, FAO and our consultant, we remain optimistic.” He added, “The field looks good but we hope that the productivity of the field is as good as it looks because that is the most important thing.”

Minister Mustapha told the media, “I am very happy to see the trial plots. Both the corn and soya bean pilot plots look very encouraging and I am very optimistic that this pilot project will yield exceptional results ahead of commercials and large-scale production of these two very important proteins for the poultry industry.”

Mustapha noted that government will be investing $500 million to facilitate much needed infrastructure. He said that this is part of government’s Intermediate Savannah Development Initiative.

“To facilitate production in the Tacama Savannah, we’ll be doing the 18km of road, drying floors and other facilities. As you know, access is critical when undertaking projects of this magnitude in these far-off locations. I am happy to inform you at tenders are currently out for the roads. That should be closing shortly. Furthermore, very shortly tenders will be out for other key infrastructure in that area. Like I said before, access is critical so we thought it best to get the road project up and running, but all in all, this will be a multi-year project.”

The investment in soya beans and corn is being made by six local companies and a regional firm. These are Guyana Stock Feed Ltd., Royal Chicken, Edun Farms, SBM Wood, Dubulay Ranch, and Bounty Farm Ltd., along with the Brazilian-owned N F Agriculture.

Guyana is expending close to US$25 million annually on proteins for the poultry sector.

Mustapha said that government is keen on reducing spending, especially on commodities that can be produced locally. He assured that government is ready to work with investors and provide the necessary support to ensure projects of this nature get off the ground.