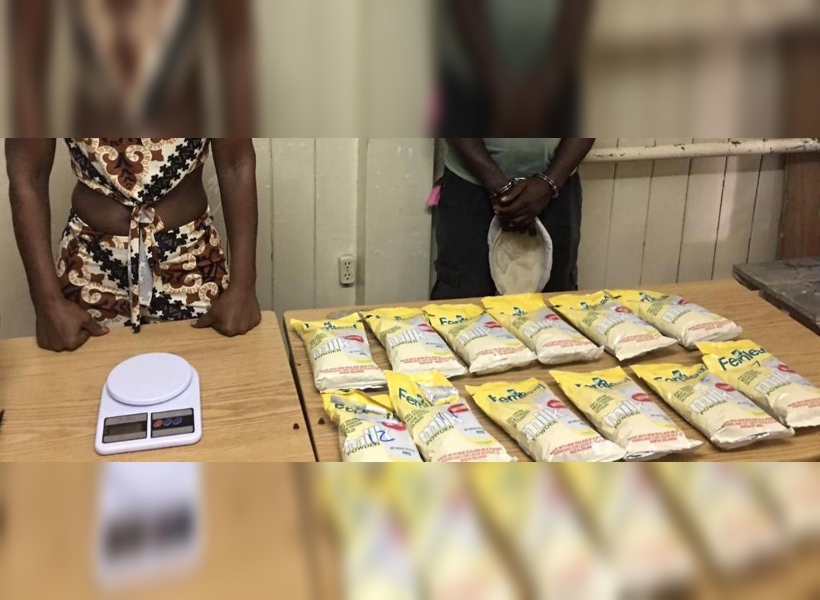 A 34-year-old, New Street Cumberland, Canje woman is in police custody after she was found with over 8lbs of cocaine in Fernleaf milk packets.

She was caught at the Eugene F. Correia International Airport, Ogle with the narcotic in her luggage. She was bound for Barbados on Caribbean Airlines Flight BW 217.
The search was prompted after the woman was seen acting suspiciously. Inspection was carried out on her luggage where a law enforcement rank found several Fernleaf packets of milk among clothing and other stuff.

As a result of the discovery, the rank opened and tested the contents of two of the Fernleaf packets, using the Narcotic testing kit, during which there was an indication of a narcotic.

As a result, the female suspect was told of the offence committed, arrested, and cautioned. Initially, she remained silent but subsequently claimed that someone (male, name withheld) had given her the items to drop to Barbados.

As a result of this new information, the second suspect was contacted, told of the offence, arrested and cautioned. He admitted giving the woman the stuff but denied knowing about the cocaine.

They were both escorted to the Criminal Investigations Department Narcotics Branch and placed in custody.
The cocaine was weighed and it amounted to 4.873kg. Investigations are ongoing.