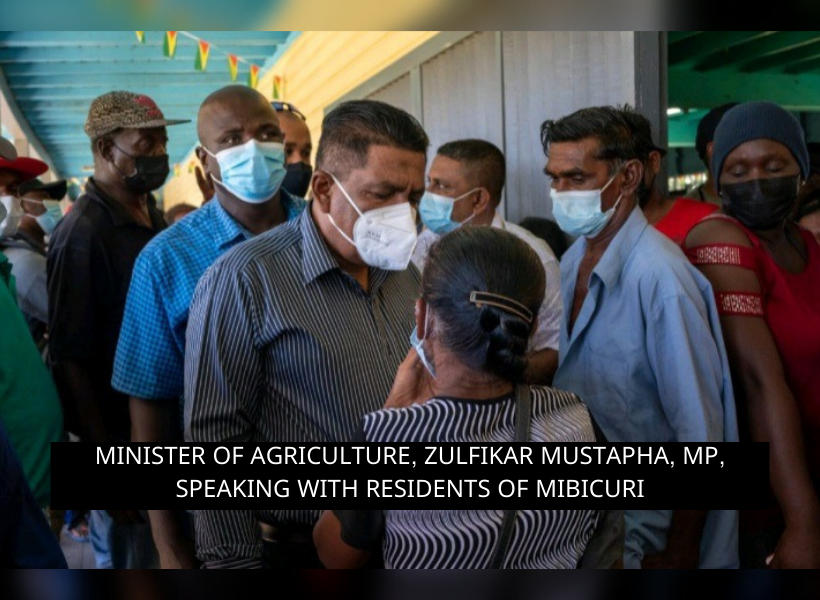 Addressing beneficiaries at Auchlyne, Lesbeholden, Yakusari, Johanna, and Mibicuri, Minister Mustapha said the Government will continue to make investments in the agriculture sector and more importantly, in the citizens.

“The Government is trying to help us, there were many times in this country when we had flood in 2017/2018 and nobody received anything. Now we are receiving something from the Government and let me be very frank with you all, since we got into Government, we are trying our utmost to help the people of our country” the Minister said.

Minister Mustapha said the grant is not a compensation for the losses the farmers faced during the floods, but an investment made by the Government to ensure that they can resume farming as quickly as possible.

“The Government has seen it fit that we try to get the farmers back as early as possible, as quickly as possible to the lands.”

The Agriculture Minister noted that the grants are being distributed in a non-discriminatory way. He outlined several measures which are aimed at putting back billions of dollars into the pockets of ordinary Guyanese. Among these are the ‘Because We Care’ cash grant which saw every child in the public school system benefitting from $19,000; and the COVID-19 $25,000 cash grant.

Meanwhile, the Minister reassured farmers whose names were not on the list to receive their cheques on Sunday, that special effort will be made to ensure that they can receive their grants within a week or two weeks.

The Minister added that Government will embark on several flood mitigation initiatives.

“The President has announced that in the three regions, Region Three, Region Five, and Region Six, that we will build a canal like the Hope Canal so that places like Black Bush Polder will not be affected by the severe flooding that you had in the last few months that you had… So, all these are the investments that we are making to the people of our country, we want to develop the Agricultural sector,” Minister Mustapha said. (Extracted and modified from the Department of Public Information)