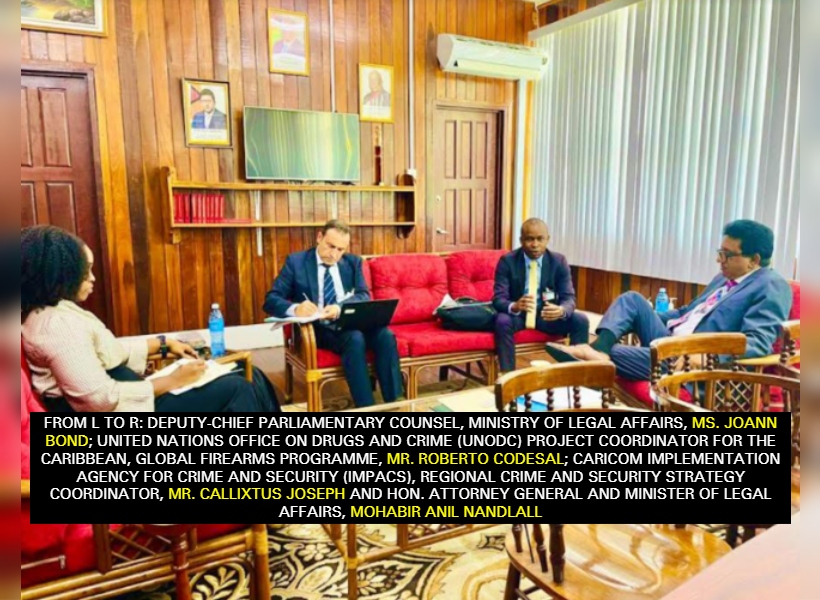 The purpose of the team’s visit is to conduct a needs assessment in relation to combatting unlawful firearm use and trafficking in Guyana, to synergize efforts in the Caribbean, South and Central America.

The Attorney General in his remarks alluded to the realistic challenges facing Guyana with its vast, porous borders and welcomed any assistance that would increase the country’s effectiveness in combating the unlawful use, possession, and trafficking of firearms.

He noted that Guyana’s principal firearms legislation was passed in 1940 and while it has been updated on several occasions, he is of the firm view that new legislation is needed. He advocates for common legislation for the Caribbean which will enhance cooperation and effectiveness in addressing the use, possession, and trafficking of illicit firearms in the Region.

With the financial support of Germany, in cooperation with the CARICOM IMPACS, the United Nations Regional Centre for Peace, Disarmament, and Development in Latin America and the Caribbean (UNLIREC), and in line with the Caribbean Roadmap, the UNODC introduced the “Support to the implementation of the crime prevention and criminal justice component of the Caribbean Roadmap to counter illicit firearms trafficking and misuse across the Caribbean in a sustainable manner by 2030”.

The Project was launched on the 1st of March, 2021, and covers the Caribbean region, including all CARICOM Member States. Therefore, Guyana will be receiving assistance from the project.
The project was designed to address the scourge of armed violence in the region by enhancing the capacity of criminal justice systems to counter illicit proliferation and misuse of firearms, through the detection, investigation, prosecution, and adjudication of illicit firearms trafficking cases and related offences.

Specifically, the project will address capacity building, legislative assistance, promote international cooperation, enhance the tracing of firearms. Currently, UNODC, IMPACS, and UNLIREC are planning a legislative review of Guyana’s laws relating to firearms to determine any gaps and loopholes. There is also training planned on the detection of firearms by air, land, and sea and the prosecution of firearms offences.

Important to note is that the project will seek to establish national firearms focal points in each CARICOM country and promote the creation of a firearms network.

The Attorney General indicated that Guyana is willing to partner with UNODC, IMPACS, and UNLIREC on this initiative. He also emphasised that Guyana has signed on to all international instruments relevant to the use and trade of illicit firearms, including the Arms Trade Treaty and the United Nations Protocol against the Illicit Manufacturing of and Trafficking in Firearms, Their Parts and Components, and Ammunition.