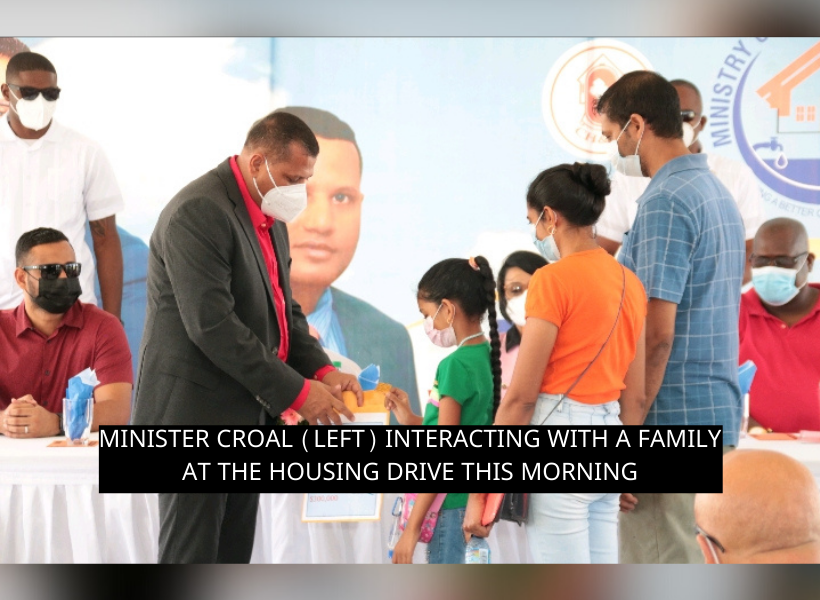 The event was hosted at the Arthur Chung Conference Center, Liliendaal, Georgetown, under strict COVID-19 measures.

Minister of Housing and Water, Collin Croal stated that the house lots allocated fall within the La Reconnaisance community. He noted that with the distribution of the house lots the Ministry has plans in place that will see the holistic development of the housing area.

“We do not just allocate house lots in an area but also perhaps more importantly, strive to create communities where our citizens can thrive. La Reconnaisance will boast of educational, social, health, safety and recreational facilities,” the Minister stated.

The areas will also be outfitted with the infrastructure developments including access roads and bridges, as well as, basic utilities such as electricity and water.

On the East Coast of Demerara, the Minister Croal further noted approximately $3.7 million in infrastructure works are ongoing in Cummings Lodge, La Bonne Intention (LBI), Mon Repos, Annandale, Vigilance, Bladen Hall and Strathspey for housing development. Construction to the tune of $4.3 billion is also scheduled for the end of the year in LBI and Annandale and is expected to form a part of Budget 2022, to develop house lots allocated in 2021. In the area of water, a number of new wells are being drilled and transmission mains installed.

Meanwhile, Susan Rodrigues, Minister within the Ministry of Housing and Water, underlined that the government’s housing policy is founded in inclusivity and non-discrimination.

“All Guyanese regardless of your race, political, geographical or income bracket will benefit from development…We have to move forward, we have to do it equitably and at the same pace of development,” the Minister said.

In addition to the house lots, the Ministry is also expected to distribute some 403 Certificates of Titles and Transports through the exercise.

Both Ministers were also on ground, addressing housing and water concerns of members of the public, through one-on-one interactions.