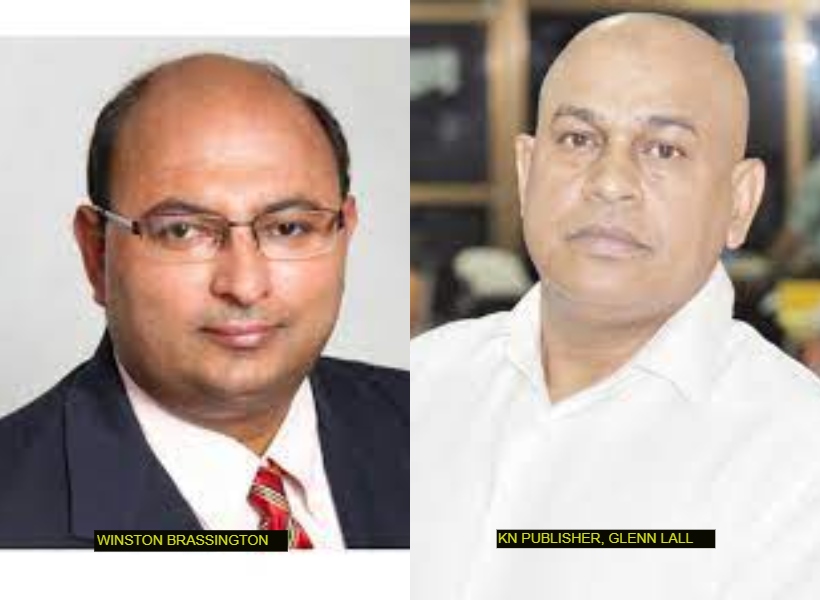 With 12 more libel cases to go, former Head of the National Industrial and Commercial Investments Limited (NICIL), Winston Brasington, has already won over $36M in damages from Kaieteur News Publisher, Glenn Lall.
The most recent judgment was awarded this week by High Court Judge, Fidela Corbin-Lincoln for defamatory remarks Lall and his former Editor-in-Chief, Adam Harris published about Brasington back in 2014. In the seventh case that appeared before the court, the Judge awarded Brasington damages to the tune of $2M.
In the first five she presided over, the former NICIL head won over $17M with interest. The sixth libel case was heard by Justice Navindra Singh who handed down a $10M award for Brasington.
During his radio programme this evening, Lall noted that he has applied to the court for a payment plan while lamenting the impact of the climbing costs during the COVID-19 pandemic.
Lall said, “I don’t know if you remember, but me, Adam Harris, and the Kaieteur News were sued 19 times in one day by Winston Brasington back in 2014. Well, last year September Justice Fidela Corbin tried five and she awarded him $3.5 each with 4 percent interest rate. That came up to $17.5 in total. A few months later, Justice Navindra Singh tried one of the cases and gave him $10M. Those six cases total $27.5M. Added with some legal fees, those six cases moved to $34.4M …”
The KN Publisher further disclosed that before the latest judgment, Brasington through his lawyer, Timothy Jonas, had moved to the court and obtained a garnishment letter which allowed them to remove cash from the company’s account until the damages awarded by the court are fully covered.
“Since then, I have applied to the high court to have a hearing to work out a payment plan. I was given October 6, 2021. I am not running from paying but owh man, give the company time to pay, it is COVID-19 and I don’t have to explain what is going on with businesses around the world and what is facing every citizen,” the businessman concluded.
Lall insisted that he was not expressing his feelings on the matter to invite pity for a soul to help him pay the outstanding awards. He said all he needs is time to pay it off, even if it is with interest.