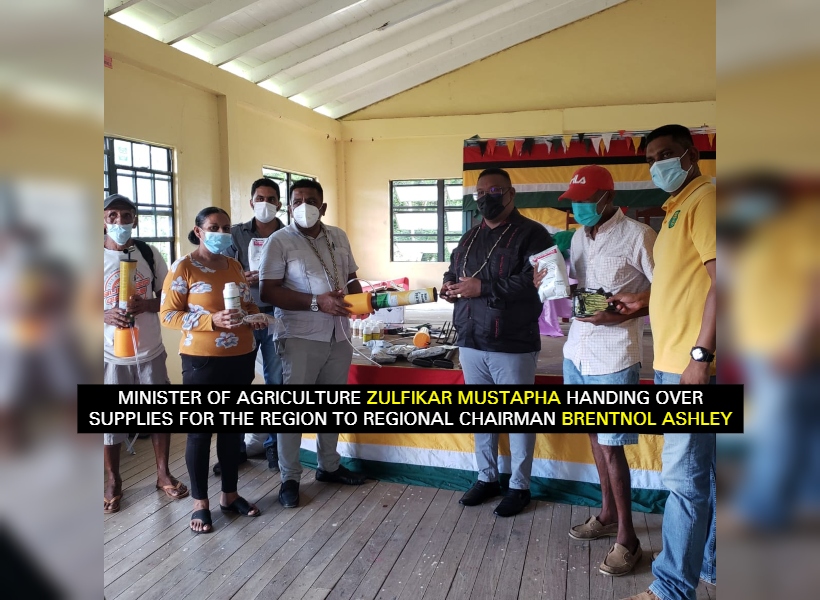 Farmers of Mabaruma are now optimistic that they might finally realize the “potential” which they have always been told to have.

The Minister met with hundreds of small to medium scale farmers during his visit to Kumaka, Wauna, Whitewater, and Kamwatta.

Farmers had the opportunity to voice their concerns to Mustapha who was keen to, as far as possible, provide on-the-spot solutions.

The need for pest control, long-term solution to flooding, accessibility to land, high cost of fuel, machinery, and transportation were some of the overall concerns raised.
In his response, Minister Mustapha told residents that he already had, on-site, an adequate supply of substances for pest control. He noted that the farmers can look forward to a steady supply free of cost from the Ministry. This move was applauded by farmers.

Minister Mustapha indicated that the government will also be doing its part to alleviate the effects of heavy rainfall. He told farmers that the region will soon be provided with an excavator. However, Mustapha implored formers to move away from farming in the swamps. He said, “we cannot keep doing the same things over and over expecting a different result. We have to move away from the old way of doing things.

Since access to transportation was a constant cry of farmers at all locations, the Minister also endeavored to provide a “tractor or two” in the near future.

Being that he was providing on-the-spot solutions to many of the issues raised, the Minister was pressed to pronounce on the high cost of fuel “that affecting we bad, bad. We use to get from Venezuela but that stop and we in de pressure.” Mustapha assured the farmers that every concern of theirs is taken seriously but he explained that he was not in a position to readily pronounce a solution for that particular problem as it does not fall under his jurisdiction.  Mustapha said, “But I can tell you, I will bring the matter to the attention of my colleague.”

Farmers, especially those of Kamwatta and Whitewater lamented the lack of market for their produce. The farmers said that it is quite disheartening to put in all that work yet, if they happen to overcome all other obstacles, they still get a hard time selling their produce.

In response, Minister Mustapha boasted that the Guyana Marketing Corporation (GMC) was successful in finding market for the Arnaputa farmer’s produce. He said, “We can do the same for you.” The Minister committed that within a week or two, he will send the General Manager of GMC to meet with the farmers and charter a way forward in that regard.  Mustapha said that the GMC can find markets not only in Guyana but within the Caribbean. The framers of Kamwatta and Whitewater mostly produce peanuts, cassava, turmeric, and ginger.

The Agriculture Minister also encouraged the farmers to diversify. He supplied them with several seeds including watermelon, sweet pepper, eschalot, bora, carrot, and celery. Those were handed out at all locations along with other farming supplies like shovels and forks.

Further, Mustapha told the farmers that he will soon return to the region to initiate the distribution of the government’s flood relief. He noted that no farmer will receive less than $50,000. He explained that the “assistance” amount will be assessed based on the losses.