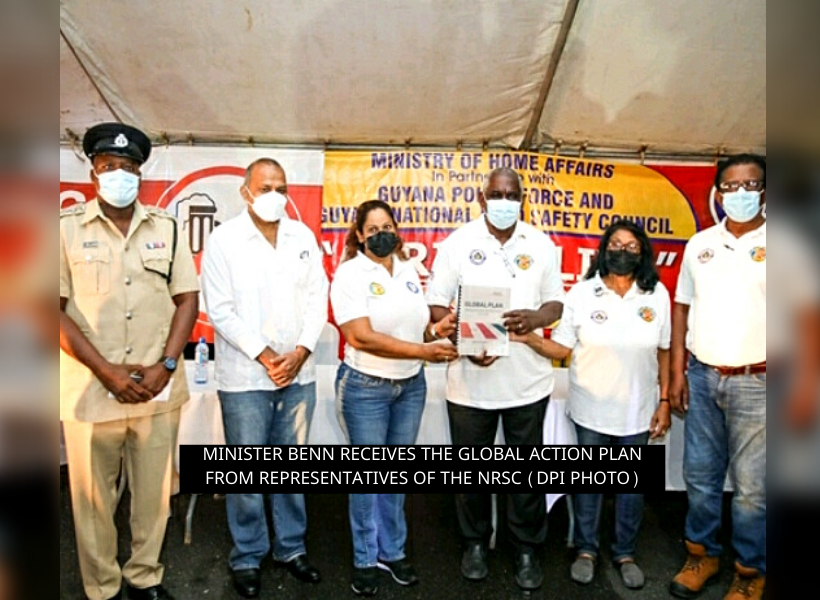 The Ministry of Home Affairs, in collaboration with the Traffic Department of the Guyana Police Force and the National Road Safety Council (NRSC), on Sunday, held its World Day of Remembrance Celebration, to honor the lives lost in road accidents over the last few years.
World Day of Remembrance for Road Traffic Victims is celebrated on the third Sunday in November.

This year, the NRSC hosted an awareness drive, beginning at Turkeyen and culminating at the National Stadium, Providence.

Delivering the feature address, Minister of Home Affairs, Robeson Benn, urged drivers to be more responsible when traversing the roadways. He said it is important for other drivers to observe and report the signs of dangerous driving before it results in road carnage.

“The more important thing is to catch beforehand the warning signs, the indiscretions, the bad behaviour the bad practices which lead us to points where we have…serious accidents, which result in serious injury and loss of life,” he explained.

The minister opined that the NRC should be given a larger budget to be able to execute the work of the council more effectively.

Minister Benn reaffirmed the government’s commitment to curbing the high incidences of road fatalities in the coming years.

Minister of Health, Dr Frank Anthony, who was also present at today’s event, reminded drivers to take special precautions if they know they would be under the influence of alcohol.

He said statistics have shown that more than 6,000 people lose their lives on an annual basis to road accidents, most of which are consequences of drunk driving and the use of cellular phones while driving.

“This is one of the days where we can reflect on all those persons who have, I would say, senselessly lost their lives because of someone either not doing the right thing, either speeding, drinking and driving, or in some cases being distracted because they choose to use their cell phone while driving,” he reiterated.

Speaking with DPI on the sidelines of the event, NRSC Coordinator Ramona Doorgen said the initiative seeks to bring awareness to the damage caused to family members who have lost loved ones to dangerous and drunk driving.

“We use this as a public awareness tool…to bring awareness to the public, to say that it could be me [or] it could be you…and also see the grief that comes out of things like this, hoping that persons would recognise that road safety is a serious, serious issue,” she explained.

The Decade of Action for Road Safety plan is a United Nations (UN) initiative that has set the target of reducing road traffic deaths and injuries by 50 percent over the next 10 years.

The Decade of Action for Road Safety plan is a United Nations (UN) initiative that has set the target of reducing road traffic deaths and injuries by 50 percent over the next 10 years. (Extracted and modified from the Department of Public Information)