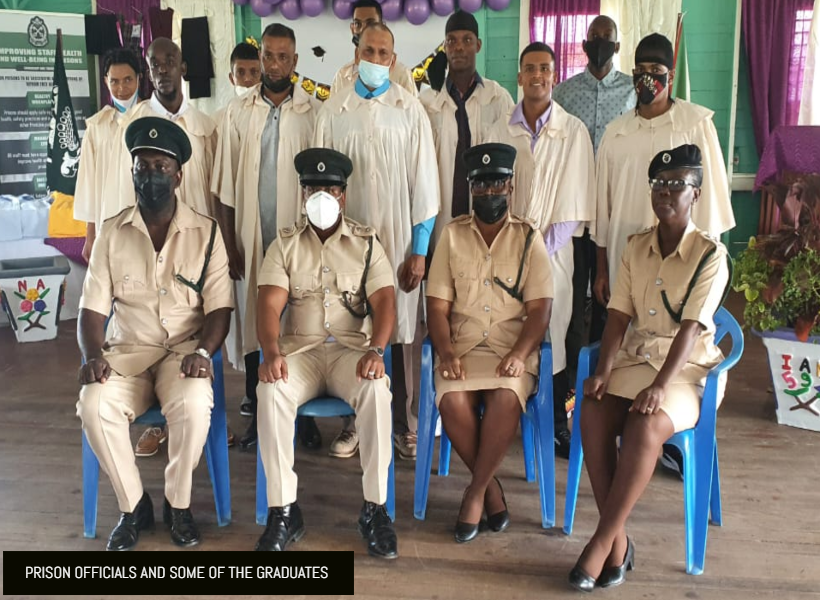 Eight hundred and sixty-one inmates housed at the Mazaruni, New Amsterdam, Camp Street and Timehri Prisons were Wednesday last (January 12, 2022) recognized for successfully completing several training courses in various programmes aimed at preparing them for reintegration into the society.

Among those who graced the stage all decked out in their gowns were high profile and special watch inmates. Convicted and remanded prisoners were also given an opportunity to participate in the training areas such as: entrepreneurship, anger management, carpentry and joinery, family reconciliation, tailoring, culinary arts, art and craft, cosmetology, barbering, crops husbandry and Veterinary Sciences.

Meanwhile, Director of Prisons (ag), Nicklon Elliot said inmates were given an opportunity to participate in the various programmes which focused on imparting skills with the aim of preparing the participants for reintegration into the society.

Elliot also explained that the Prison Service has an obligation and mandate to provide prisoners with skills to facilitate their reintegration into society while adding that the prison’s task is to help the inmates realise their mistakes and become better individuals.

Elliot further stated that the prison directorate remains confident that as the prison infrastructure continues to be developed, more prisoners will benefit from such rehabilitative training.

He made it clear that rehabilitation of prisoners is an ongoing process, stating that “we are adequately preparing them whether it is with skill or educational training so that when they are released back into society, they are productive citizens.”

The graduates were all presented with a certificate in recognition of their successful participation.