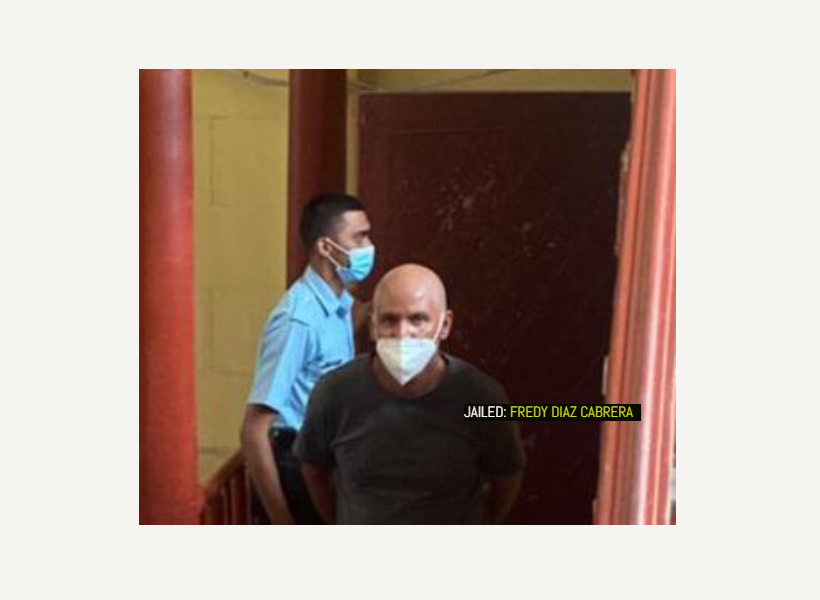 A Dominican Republican, previously convicted in the US for trafficking cocaine, was today sentenced and fined by a City Magistrate for a cannabis bust at the Guyana National Industrial Company (GNIC) Wharf.

Fredy Diaz Cabrera was brought before Principal Magistrate Sherdel Isaacs-Marcus who handed down the sentence after he pleaded guilty to a trafficking of narcotics charge.

The foreigner admitted that on January 19, at GNIC Wharf, Lombard Street, Georgetown, he trafficked 36 pounds of cannabis. He was sentenced to four years and six months in jail and fined $14,441,400, after he told the court that he was previously convicted for a similar offense. He was before a USA court and served time before his release in 2001.

Epiphany McLennan was also charged with him. She denied the charge and was remanded until January 18. Eustace Rodrigues was charged with trafficking the same amount of cannabis on January 18, at Albouystown. He was also remanded.

According to Cabrera, Rodrigues told him to transport the cannabis to Barbados. However, McLennan said she had no knowledge of the cannabis.

The police reported that on January 19, Customs Anti Narcotics Unit (CANU) officers conducted a narcotics operation at the wharf during which officers from the Special Operations section conducted a search on a vessel that was scheduled to leave Port Georgetown with a quantity of cement. Several parcels suspected to be cannabis were discovered throughout the vessel during this search.

The vessel is foreign-registered, with a crew of 19 foreign nationals. The parcels, along with the vessel’s crew, were taken to the CANU headquarters for further processing, where the narcotic was tested and confirmed to be marijuana – a foreign type known as ” creepy ” with a total weight of 16.046 kgs (36 lbs.), the street value is approximately $14,000,000.

It was further reported that this operation is part of an ongoing multi-agency and multi-national investigation aimed at dismantling a regional network involved in the movement of narcotics from Guyana using cargo vessels.