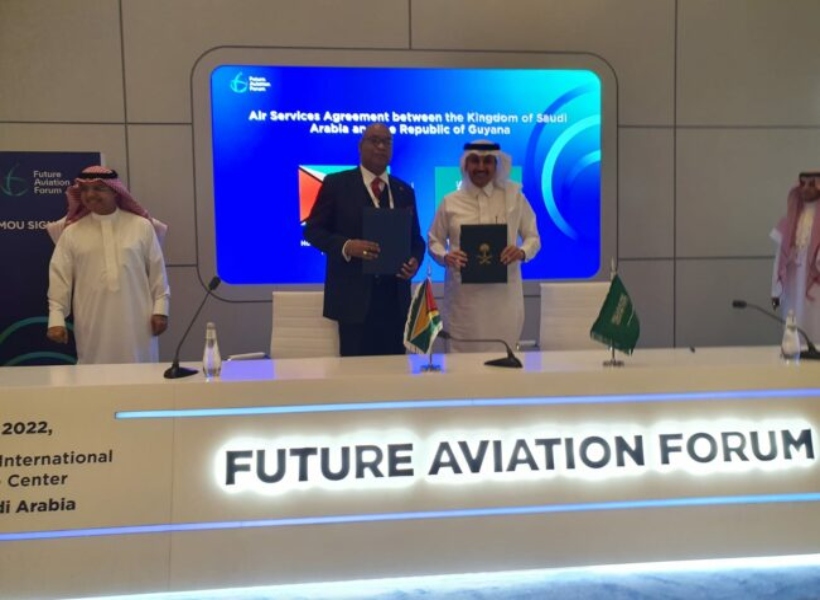 On Monday, May 9, 2022, Guyana signed an Air Services Agreement with the Kingdom of Saudi Arabia to promote and facilitate the expansion of international air services opportunities between the two countries.

Guyana was invited by the Kingdom of Saudi Arabia to sign the agreement and participate in the Future Aviation Forum which is currently being held in Riyadh, Saudi Arabia during the period May 9-11, 2022.

Minister Edghill said, “Presently there is no direct flight between Guyana and Saudi Arabia, however, this agreement puts in place the legal framework that opens market access for airlines to operate and enhance competitive air transport services, trade, and economic growth between the two countries.”

The Gulf carriers from the United Arab Emirates, Qatar, and Saudi Arabia have been playing a significant role in global connectivity for passengers and cargo over the last two decades. Saudia, the national airline of Saudi Arabia is the third-largest airline in the Middle East in terms of revenue, behind Emirates and Qatar Airways. The airline operates international flights to over 94 destinations in the Middle East, Africa, Asia, Europe, and North America.

Minister Edghill further said, “through the signature of the Guyana-Saudi Arabia Air Services Agreement, we anticipate that it will serve as an impetus for Saudia, the national airline of Saudi Arabia to explore air services to Guyana, Latin America and the Caribbean since the airline does not have a presence in this region of the world.”

The signing of this agreement is in keeping with the government’s commitment to connecting Guyana with the rest of the world.

This agreement complements the more than 50 Air Services Agreements Guyana has established with other member states of the International Civil Aviation Organization (ICAO) for the development of the air-link among States.